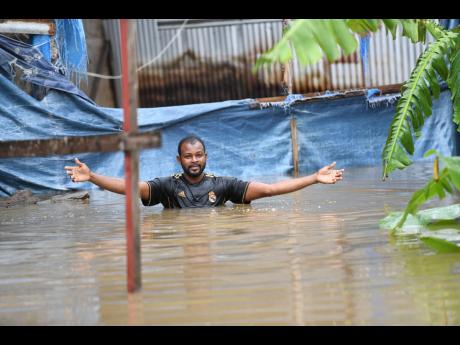 Dwayne McKoy shows how high the water is. 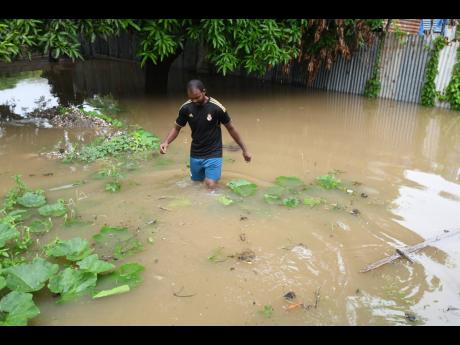 McKoy says the flooding in Hampton Green has been a long-standing issue. 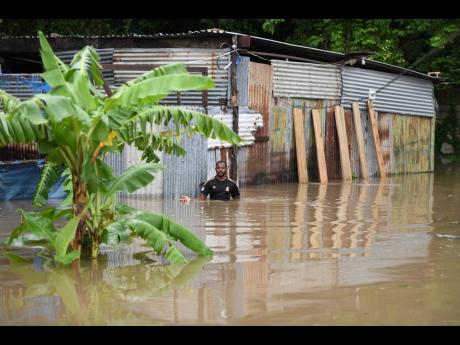 Behind him, his shop was like an island, completely surrounded by water. McKoy, who is six feet, two inches tall, had water up to his chest, after Jamaica experienced rainfall from Sunday night through to Monday morning.

"It is a usual thing! Every time the rain fall, the whole place flood out. Sometimes all three times in one week. It depends on how the rain fall. When it flood like this, all three, four day it take fi run off," McKoy told THE STAR. "And that cause mosquito. A regular ministry of health afi spray round here. We need some intervention. This is something that need fi rectify. Me nuh have nowhere else fi go! We a Jamaicans so me just afi gwane tough it out. Me try fi set up my business where me live, so me caa run weh lef it."

McKoy has been living in Hampton Green with his wife and stepson for seven years. When the roads were fixed five months ago, he thought the water would run off easily after heavy rain.

"It get worse because there is a drain at the back of each house that is supposed to be cleaned and dem never clean. So, that cause all the flooding," he said.

The area is also known to be a crocodile hotspot. On the highway, there's a sign erected by the National Environment and Planning Agency that reads 'Beware of crocodiles.'

"Crocodile round there ... that is the worse thing. Me see bout three crocodile already. I saw one of them this morning before the water get so high. It wasn't over our section, but I don't know if it cross over or not. The water high and it brown, so anything can happen right now," McKoy said.

The Meteorological Service issued a flash flood watch for low-lying and flood-prone areas of all parishes, after the tropical depression that is south of Jamaica developed into Tropical Storm Delta.

"The water continuously a rise. It nuh reach the house yet, but the water a continue fi rise. If we get another half an hour worth a rain in the night, who live downstairs afi go evacuate," McKoy shared. He said that his woodwork shop was completely flooded out and everything was damaged.

"Me just go in there go try fi rectify some more things. Me just afi take out weh me can take out. Some a dem can dry and use, but like plyboard, if water catch it, it damage. And superboard, when water catch it, it swell. So, all a dem material deh gone. Nail, glue, screw, all a dem gone," he said.