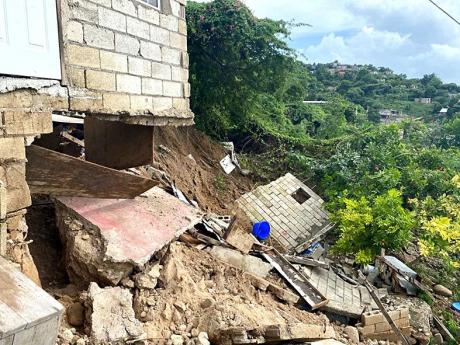 Only a part of the two-bedroom house remains at the original spot, as much of it has tumbled down the hillside. 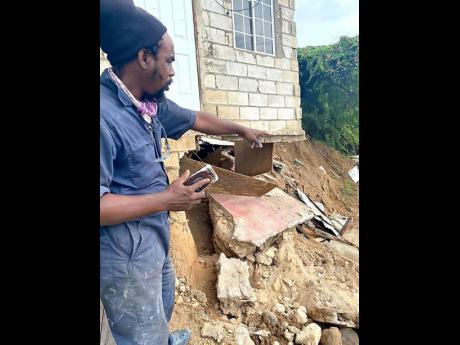 Norman Grant shows where a part of his house stood. 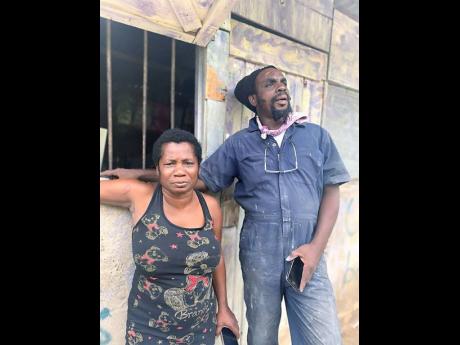 Norman Grant and wife Ilet are wondering how they can start over.
1
2
3

After 20 years of saving to build a place he could call home, 50-year-old Norman ‘Foodie’ Grant watched his investment destroyed in a matter of hours last Sunday.

A landslide in Seven Miles, Bull Bay, St Andrew, sent most of the two-bedroom concrete structure in a wooded area of Shooters Hill tumbling down a hillside.

“This shake me up man because me poor and it a the first house me build up so it take a toll on me,” said Grant. “Me devastated and want to burst out and cry but me just a laugh it off right now because if me follow it me mad.”

Heavy rains which pummelled the island on the weekend, loosened the soil on which the house was built. Grant said the incident occurred approximately 8 p.m. while he was relaxing at home with his wife.

“We did realise the column ease off the wall but we never a really pay it no mind. But when she walk past a next part where the bathroom is, she see the wall crack up and me a say to her that it look serious,” he said. The couple reasoned that the weight of the house may have pushed the land down because of the constant rain.

Me wife a bawl out

“Then we start hear like the stone them a roll out over the pit top outside,” Grant said. “Little after me hear me wife a bawl out ‘a wah sound so?’ When me look, a side of the house drop over on top of the pit and a straight outside me a look. Piece a the place gone.” Grant said more of the remaining portion of the house is slowly falling off.

“That mean the whole thing don’t have any use because it a break down piece by piece,” he said. “Me cayh believe say everything gone in one night after me work so hard for so much years. Dresser, wardrobe and them stuff mash up drop gone down in a hole.”

His wife, Ilet ‘Dawn’ Grant, 59, who recently suffered a stroke, is devastated that they have no place to call home now.

“We did rent a place at first and then the people them did want it so we had to leave and just move it to this place since me come out of hospital,” she said. “Me just deh here a look and take it easy because me is a sick person so me can’t really think about it too hard.”

Bull Bay has been especially hit hard by the heavy rains. Last Friday, a father and daughter, Romeo and Sanique Leachman, perished after a landslide covered their home.

On Sunday, persons had to evacuate their homes after the Chalky River overflowed its banks. Meanwhile, Grant’s wish is to find a safe haven for his family.

“Me need some assistance from anybody who can help man, me need a start again in a life because me life done right yah now,” he said.