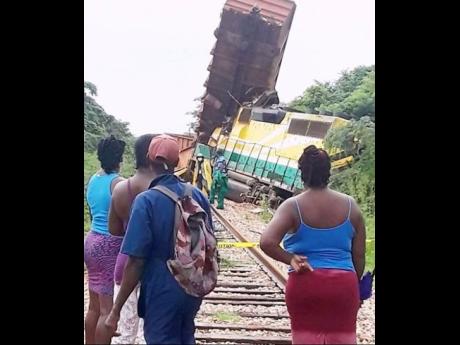 Curious onlookers view the derailed train. The driver is reportedly okay after the crash.

Jamalco is reporting that the driver of the train that derailed in Clarendon on Monday is okay.

"The driver is okay. Everything is okay. We are just repairing the train now. It was a derailment. Our train transports bauxite. The train had left the plant and was supposed to go to St Jago, where it collects the bauxite, and on its way there, it derailed," Donna Marie Brooks, corporate services manager for Jamalco, told THE STAR. "What was reported is that the driver of the train saw a tree in the road and by the time he got closer and was able to stop, the train derailed."

While Jamaicans were caught up in the numerous flooding that took place across the island on the weekend and Monday, the derailment also grabbed the attention of many on social media.

"What has been theorised is that there was a little waterlog at a section of the road. I think there was some compromising that took place in terms of the land itself which caused the derailment," said Brooks.

Jamalco began production in Clarendon in 1972, and the railhead from which bauxite is transported to the refinery is located at St Jago in Clarendon.

As Jamaica faced heavy rain from the outer bands of Tropical Storm Zeta, the terrain in many areas has been severely damaged. Several roads were also made impassable, some of which have been cleared.