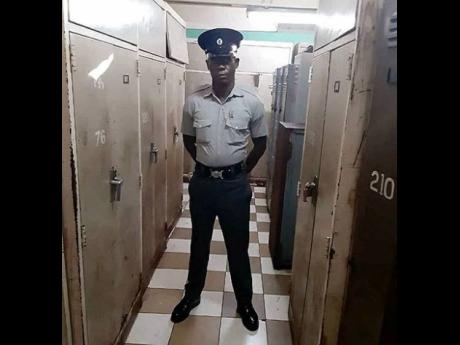 Jimel Westney, the correctional officer who was stabbed to death at the St Catherine Adult Correctional Centre on November 13, had been in the job for only a month and two weeks.

Jimel, 32, worked as a metropolitan police officer in May Pen, Clarendon, for approximately four years, but decided to switch to the correctional service because he thought the job was too risky.

According to the slain warder's father, Errol Westney, Jimel decided on the career move after one of his colleagues was killed at his home sometime in March by gunmen.

"A home the other worker a go and as him reach a him gate gunman shoot him. So because a that and because people did a threaten them, him just decide to leave and because people did a tell him is not a good job," said Westney. "Two weeks after him apply for the warden work them call him, and he was so happy and joyful. Him not even stay no long time there and look what happen! Probably if him did stay in the other work, him would be here today."

The police reported that Jimel was attacked and stabbed with a makeshift icepick by a prisoner while he was on the job at the maximum security prison. He died while being treated at hospital.

Westney, 60, said he had a great relationship with Jimel, the second of three children. With him gone, it is like a piece of him is now missing.

"Sometimes me can't even manage to hear about him, the other day they were planning to print some shirt with him on it and I tell them not to do it because me can't stand to look on his pictures," he said

Westney said that Jimel was "like the right hand to me". "Anything me want him, me can depend on him to show up at my house with groceries and pocket money anytime him get pay, he told THE STAR. "My life will never be the same because every time me think about my son me just sad, a just drink me have to be drinking right now to ease my mind sometime."

Jimel died leaving a daughter -- one year and two months -- and her mother. Westney said both are having a hard time coping.

On Sunday night, a few of Jimel's co-workers visited his Chapelton, Clarendon, home to spend time with his family. Westney said it was a sad occasion as there were tears all around.

"Them feel it too, it's like some people take it to heart because them miss him," said the grieving father, who said Jimel was fun-loving and enjoyed putting smiles on peoples' faces.

A date for the funeral has not yet been set as the family is still waiting on the autopsy to be done.