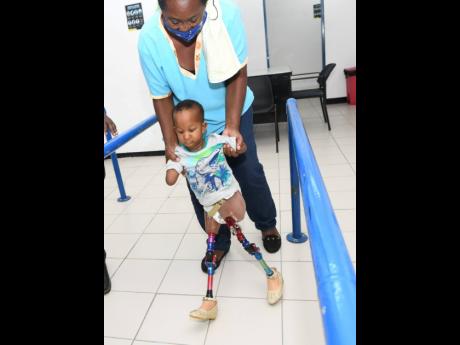 Caregiver Rose helps Mary take her first step after being fitted with prosthetic legs at Surgix Jamaica, located on the compound of the Sir John Golding Rehab Centre, Mona, on Thursday. 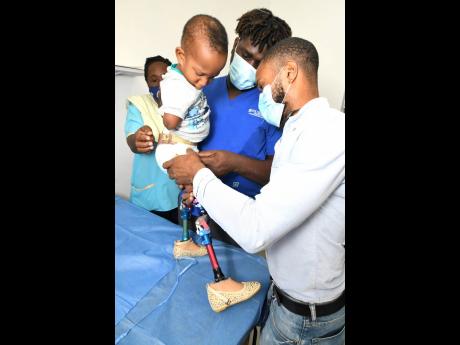 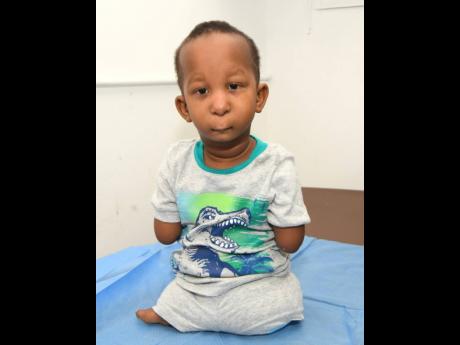 Mary, waiting for her prosthetic legs to be fitted.
1
2
3

It was pure joy at the Sir John Golding Rehabilitation Centre yesterday as four-year-old Mary took her first steps. Mary, a resident of the Missionaries of the Poor Nazareth Home, was born without limbs.

Winfield Boban, managing director of Surgix Jamaica Limited, located on the compound of the rehab centre, watched in awe yesterday as his prosthetic technicians set about helping Mary.

"Mary can be anyone in life, she can be anything. But all she needs is a chance," said Boban, who added that the road to getting the girl's arms and legs began last November after he was approached by Archbishop Joseph Harris for assistance.

Boban said that after meeting Mary for the first time, he saw it as "an awesome challenge to give her hands and feet, so that she can live a normal life."

Mary was not shy to show how she can independently feed herself and properly sit without the assistance of her caregiver. She sat attentively listening to Boban's conversation, often sharing a smile or shedding a tear. Her faint greeting of "Hi!" to our news team warmed the hearts of everyone in the room.

The prosthetic technicians at Surgix, Lasana Pyrce, Tutu Campbell and Orlando Brown were tasked with designing legs for Mary and they could be seen busily finishing up the legs to ensure they would fit. The cost for her prosthetics was covered by Surgix, but Boban explained that it would cost millions to seek rehabilitation overseas for the child.

"Once we get her up and moving she will be just fine," Boban said, as Mary smiled. Yesterday, after months of preparation, it was time to fit Mary's legs. She couldn't hide her excitement. Carefully, as the technicians fitted her legs, Mary watched attentively, her focus fixed on her shiny new shoes. Boban said that in the early stages she will feel a little pressure as her body gets accustomed to the legs. He added that as she grows, her legs will have to be upgraded but this is the first step in getting her to walk.

Mary, with the assistance of her caregivers Miss Pryce and Miss Rose, anxiously took her first steps. It was a nervous moment for her and she cried a little.

Rose could not hide her emotions as seeing her 'daughter' walk was pure happiness. The next phase of rehabilitation for Mary is getting hands, which will happen in another month.

"It is good day, it is an awesome thing to see she walk for the first time. She can do it but it's just the challenge of her getting used to it and getting those limbs moving, but we will keep her monitored. Her next sessions, which will be weekly, will see her undergoing physiotherapy with Dr Deandra Dallas, here at Surgix. But it is just a good move and I feel good," Boban told THE WEEKEND STAR.