Miss Cindy tilling the soil at 95 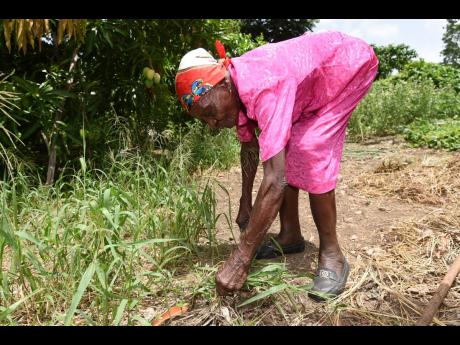 Cinderella Brown, 95, gets rid of grass and weeds from her backyard garden. 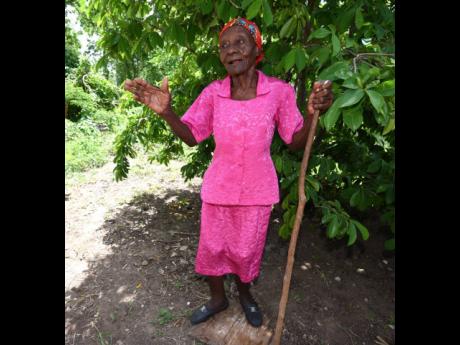 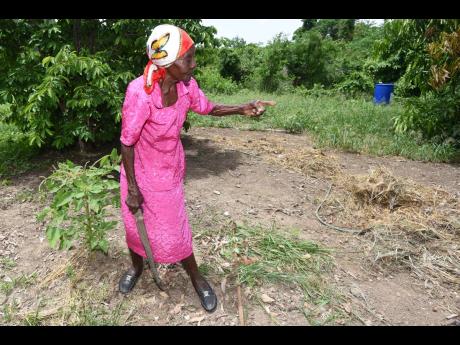 Cinderella Brown started a backyard garden three years ago. It may appear to be no great shakes, but that is until one realises this Heartese, St Thomas woman is 95 years old.

For this senior citizen, the desire to grow her own food while being at one with nature are two of the compelling reasons she took up this pastime.

"The Government have it hard, because is not one or two people [they serve] ... is the whole Jamaica him have, and sometimes they can't come up with the money [to help]. I don't let it worry me ... . I start planting little something. I come and clean down the place, and God bless it, because this is the third year I've been doing it," the elderly woman, fondly called Miss Cindy, told THE STAR.

As she led the way through a narrow track leading to her small but fertile backyard garden, she proudly pointed out the fruits of her labour, including gungo peas, beans, cassava, pumpkin and mangoes.

"I got a stroke before I started to plant, and it never last long on me. I plant, and God really bless it," she said.

"When you see things getting bad, you pray to God. God strengthen me because sometimes I come and pitch over things and fall, but I don't get hurt," Miss Cindy shared with a hearty laugh.

The joy in her eyes dimmed for a moment as she revealed that she has been contending with praedial larceny.

"The people dem bad, man, because them will come and pick all that you see me plant here, and when I tell them no they can't do that, they don't listen. Dem wicked, man. Them will come early morning or late evening and steal the peas. Them cruel, because all of them used to me and know that I did get a stroke, and them wouldn't even give you a dollar and say, 'Mi come thief your peas,'" she said, while laughing again.

The diligent and faithful woman said that her constant encouragement to youth is for them to trust in God, even as she stressed that He helps those who help themselves.

"I quarrel with them all the while and tell them that the Government have the whole Jamaica and it's not easy, because they can't always find the money. Don't fight and quarrel; it is hard, but you have to bear with them and try and help yourself. You can have anything, just go to God in prayer," she said.

Enjoying life at her ripe age of 95, Brown, who lives with one of her two children, as well as her grandchildren and great-grandchildren, spoke well of her family members. She said that they take good care of her. She added that they often encourage her to rest and take it easy, but she remains committed to tilling the soil.

Reflecting a little on her earlier days, Brown told THE STAR that, like her namesake in the fairy-tale story, she worked as a maid for many years. She also did farming.

"When I leave school, I always go up in the mountain to plant, but I can't go up the mountain again. I used to do domestic work, too, but the person I was working with wanted me to move in with him and his family and stay, but my gentleman did sick with cancer and I couldn't just leave him like that," the senior citizen said.