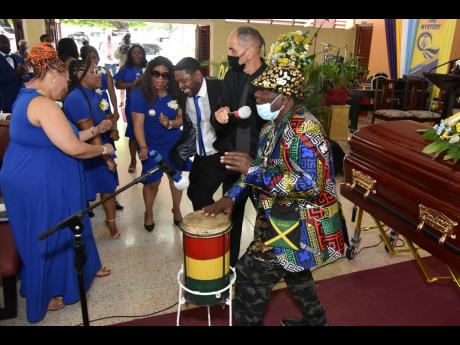 Bongo Herman gives a musical tribute during the Thanksgiving Service for the life of his friend Fitzroy ‘Bunny Diamond’ Simpson, who died on April 1 after a prolonged illness. He was 70 years old. 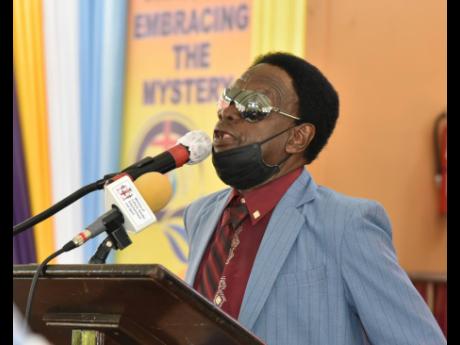 Judge Diamond delivers a musical tribute during the Thanksgiving Service for the life of his friend. 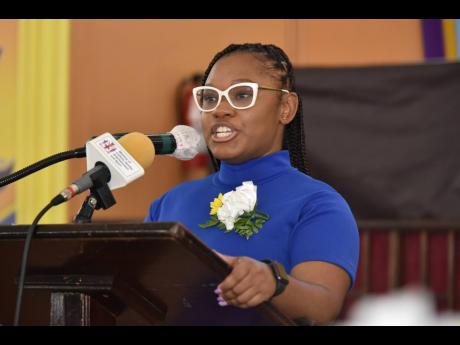 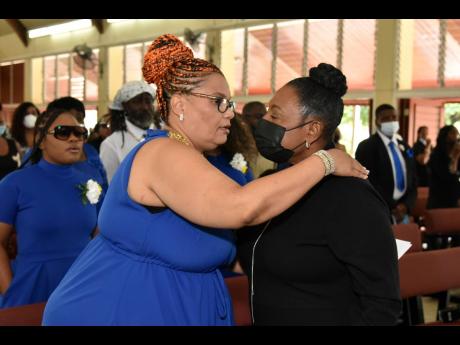 Two days after what would have been his 71st birthday, Fitzroy 'Bunny Diamond' Simpson was given a dignified farewell with a thanksgiving service at the Boulevard Baptist Church in St Andrew.

While there were not many obvious tears for the musical legend, his family certainly did him proud. So much so, that Culture Minister Olivia 'Babsy' Grange, who has been involved in many such events for members of the entertainment fraternity, had to commend them for "acting like a family".

She noted:"Eighty per cent involve controversy and I am so happy that Bunny's farewell has been conducted with dignity, and I want to thank you as a family for ensuring that."

Her tribute was a history lesson, as she shared how she met and worked with Bunny Diamond from 1969 to 2015, and praised him for his "businesslike approach to the music business", and urged others to emulate him. She reflected on the indomitable trio called the Mighty Diamonds, who had a message of love and unity, and singled out their 1983 Reggae Sunsplash performance as one of her favourites, also when "dem mash up the stadium"at a Jamaica Labour Party conference.

She echoed the feelings of many when she stated that the entertainment fraternity had lost priceless diamonds in Bunny Diamond, and Donald 'Tabby Diamond' Shaw, who was murdered.

"I must say here that Tabby had one of the smoothest and most melodious voices that Jamaica has ever produced. When I heard the news about Tabby's tragic passing, I was really left in shock. And then you can imagine that shortly after that I heard about Bunny. It took me about two days to come to the realisation that we had lost both of them literally back-to-back," Grange said.

Quoting from the group's festival song entry Rock With Me, Grange said, to chuckles from the audience: "I'm saying to Bunny, go rock with the other members of the fraternity who went ahead of you, but don't drink nuh white rum."

Bunny's 24-year-old daughter Ronece, in giving the eulogy, described her beloved father as the ultimate family man, one who was so close to his sister, Lorna, and said that he would call her every Sunday and "they would chat for hours". Seen through her eyes, Bunny Diamond was "a chatterbox" who would eavesdrop on his children's conversations and who would regale them with the same tales regularly. When he was working on an album, they would "listen to the same track for hours". But Bunny Diamond was also remembered as "the most supportive father who would push us to chase our dreams".

Musical tributes were performed by the only surviving member of the trio, Judge Diamond, who was pensive throughout the service; Dehdeh Blacks of the Heptones; Bagga Case; Bongo Herman and Apostle Kereen Gregory.

Bunny Diamond passed away on April 1. His remains were interred at Meadowrest Memorial Gardens in St Catherine.