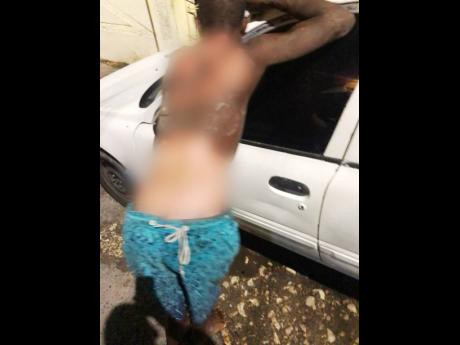 A Kingston man was left severely burnt after two mischievous teenagers, one of whom is said to be "like family", poured rum on him and set him on fire.

The incident took place at a bar in the Corporate Area on July 28. No one has been arrested in connection with the incident, as the victim, Damian Rodney, said discussions are taking place to have the matter resolved "outside of the courts".

"I know one of them auntie good like that, and she really don't want me to press any charges," the 33-year-old told THE STAR.

"Really and truly, me and the auntie a come from far, and she ask mi not to send them to prison. The little youth dem apologise but dat can't help mi now," Rodney said.

The burn victim, recalling the night of his ordeal, said that he went to the pub to hang out with friends. He was in for a massive shock when the teenagers appeared.

"One a dem throw it [rum] on mi ganzie ... . Him make him friend boost him and tell him to throw the rum and him will light it," Rodney recounted.

"When mi look, mi see dem a run go down the road and mi get up and start walk. One a mi friend help and carry mi home. The doctors say thankfully the burns didn't reach my muscles, so mi nuh get burn that bad, but mi deh a hospital from July 28," he told THE STAR on Monday.

"This has set me back because I can't work," he said.