Desperate mom scorned because of rash 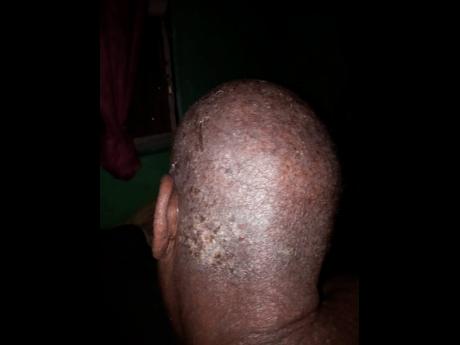 Jane (not her real name) shows the effect that her illness has on scalp.

Jane*, who resides in the county of Cornwall, said she has had a challenging past four years, as an autoimmune disease and subsequent skin rash have put a damper on her life.

The mother of one, who is in her mid '20s, said she was able to make ends meet by working as a babysitter, but is currently unable to secure a job due to her condition.

Lupus is a disease that occurs when the body's immune system attacks its own tissues and organs. Inflammation caused by lupus can affect many different body systems, including the joints, skin, kidneys, blood cells, brain, heart and lungs. Lupus can be difficult to diagnose because its signs and symptoms often mimic those of other ailments. The most distinctive sign of lupus, a facial rash that resembles the wings of a butterfly unfolding across both cheeks, occurs in many, but not all cases.

Jane said she was unable to pay for the rounds of treatment and has been without medication since last year. She is seeking the public's assistance.

"I did a biopsy for almost $80,000 and to see her [the specialist] is like $6,000 per visit. I am unable to work in my condition. My skin itches constantly. I have lost my hair because of this rash and I am not on any meds now. I have pain all over my body at times. I just need some assistance to help with my medication, food and so on. I don't know if any hospital would help or even take me in or any doctor who just help mi," she said

According to Jane, her skin is so unappealling and unattractive, that she is often scorned by some of her relatives. She said that her daughter has also developed scabies.

"She has lost her hair as well and the doctors are treating her for scabies but the medication doesn't work any more. There are persons including some of my family members who scorn me. If dem a give mi some water, dem give mi outta sanitary cups and it really hurts. But I know they are afraid of catching the rash because my skin looks really terrible. My sister is the one who cooks and gives me food though," she said.