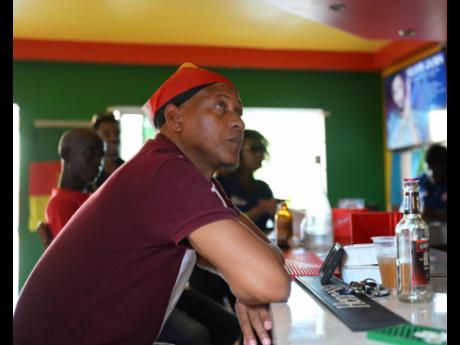 Germany supporter Desmond Faucet looks on as his team battles Costa Rica. He watched the match at the Reggae Fountain Sports Bar and Restaurant in St Andrew. While admitting his team’s failures, he also blamed Spain for not getting a draw against Japan which would have sent the Germans through. 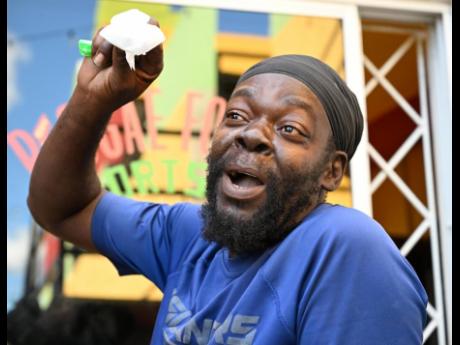 Germany fan Black Warrior gets a piece of tissue from another spectator to dry his tears, after his team crashed out of the World Cup, despite winning their match against Costa Rica 4-2.
1
2

Though initially excited about the prospects of bestowing another 7-1 victory on Brazil, Germany supporters have been left a little worse for wear after their team was knocked out of the World Cup despite beating Costa Rica.

In their World Cup opener, Germany suffered a 2-1 defeat to Asian underdogs Japan, then drew with Spain. They had to beat Costa Rica, which they did 4-2, but needed Spain and Japan to at least play to a draw. Japan won the game 2-1 to top Group E.

Recording artiste and long-time supporter of Germany Black Warrior told THE WEEKEND STAR, "Mi vex cause mi wah gi dem (Brazil) all eight this time if me did catch them. Think a joke. We gi dem seven already, enuh. A suh it go still."

He said that although he was disappointed with their performance, he was still enjoying the tournament.

"A Germany a my side, all when it lose. Cause you done know you haffi have your likkle side weh you support inna the thing. Is a 'full-joyment' thing you done know. Anuh nothing fi yuh guh fuss bout or guh mash up your TV or your car or dem something deh bout," he said.

Fellow Germany supporter Desmond Faucet shared Warrior's disappointment, saying, "You haffi depend on yourself not on another team. But Spain let us down today. Just a draw today, but I think we could have scored seven and go through ourselves."

He continued, "I could say they did barely well. I think they could have done better. The first game was a bit of a letdown and that's what caused us not to go through."

Just moments after being handed a handkerchief to wipe away tears that may have arisen from the defeat, he bounced back in good spirits.

"Germany a my side! Dem seh fi wipe out mi eyes, enuh, cause we done know we lose but a 'full-joyment' same way," he said. "Well we done know we did want fi go inna the thing some more. We shouldn't drop out so early man. A joke that man! Mi side need fi step up them thing!"

Regardless of his loyalties, however, he chastised the team for the number of missed opportunities.