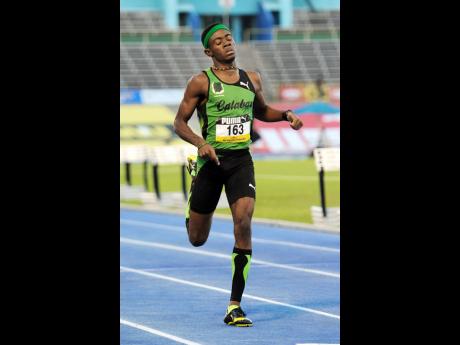 Ian Allen/Photographer Calabar High's Christopher Taylor on his way to breaking the Class Two 400 metres record at the National Stadium yesterday. Taylor clocked 46.33 seconds to erase the old mark of 46.66.

Calabar High's 400 metres sensation, Christopher Taylor, achieved another milestone in his young but illustrious career, after he clocked 46.33 seconds to lower the Class Two record for the one-lap event on the opening day the ISSA-GraceKennedy Boys and Girls' Championships at the National Stadium yesterday.

Taylor's time in the heats erased the 46.64 set by Jamaica College's Devaughn Baker in 2013.

The 15 year-old World Youth champion who is still suffering from a mild flu, won by more than 20 metres. Taylor has not ruled out lowering the record again, although he thinks it might be a bit difficult.

"I am really pleased because I came out here with only one intention and that was to break the record," he said.

The young star who fell ill with the flu just over a week ago is nearly back to full health.

"I don't think I will give a better performance (semi or final) because of my present condition. I am just taking round by round and see how it goes. But anything is possible once I put my mind to it ... ," he reasoned.