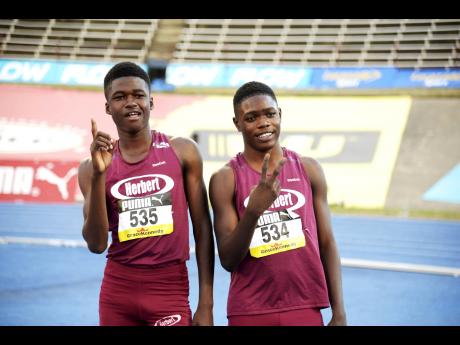 When the finalists for the Class Three boys high jump were announced at the ISSA-GraceKennedy Boys and Girls' Championships at the National Stadium yesterday, all eyes were on Cayman-born high jumper and the Class Three record holder, Lamar Reid of Calabar High.

Not many had their eyes on Herbert Morrison's Antonio Hanson and Javier Hall.

The pair, however, had their own plans and both cleared 1.85 metres to take first and second, respectively, and relegated the defending champion, Reid, to third spot with 1.75m.

Gold medallist Hanson said those close to track and field knew of their potential after both had personal best heights of 1.90 metres at the recent St Elizabeth Technical (STETHS) Invitational.

"People knew we jumped 1.90m at STETHS, so they were looking out for us but they never expected us to win. Everyone was looking out for Lamar Reid, the record holder to take this event.

"But we trained hard, trained together and fed off each other's energy and we came out here and we won."

His teammate, Hall, said he expected the victory, but thought Reid would have put up a better fight. "We expected to win and we came out to win, but he (Reid) never put up the fight we expected so there was no competition, but it is a joy taking back home the gold and silver," he added.

Calabar's Reid said it was just a bad day for him.

"I feel very bad (about result), I expected to win," he said.