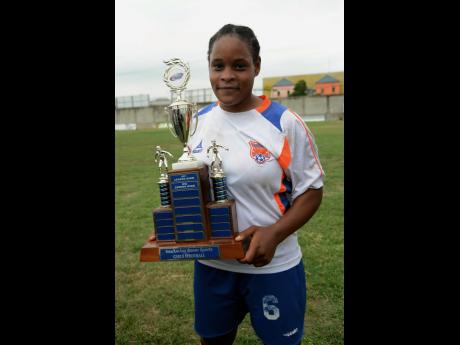 The dead ball specialist who netted two goals in last season's final predicted that they would make a successful defence of their title this year and the talented defender delivered on her promise at the Spanish Town Prison Oval yesterday to help her school to retain the trophy and claim their seventh title overall with a 2-0 penalty kicks win over many-time finalists Excelsior High.

The third year veteran who formed a formidable defensive partnership with Tarece Lawrence, not only led with her usually reliable contribution at the back but her leadership proved critical at the most pivotal moment (during the penalty shoot-out).

Both schools missed their first two kicks and with Renae Gordon, looking most uncomfortable as her turn came to kick, Green put an arm around her and whispered a word of advice to her teammate, who went out and broke the deadlock.

After both teams missed their next kick, Green then stepped up to add a second for Lennon to go 2-0 up, which meant Excelsior had to score their last two, which they failed in all their attempts from the spot. Although somewhat nervous Green was always confident her team would remain schoolgirls football champion.

"First and foremost we have to thank God for the victory. I was nervous (during shoot-out) but I knew we were going to win this trophy and carry it home. We worked hard in training and we came out determined and we are victorious. We outplayed Excelsior but we were not putting away the chances but we had to keep working until we got to penalties and we did it there," she said.

The hard-kicking defender who will lead the team again next year is eyeing a third straight hold on the title.

"I have another year at school and I feel I can take it again next year, so we will go hard or go home," she added.

The teams had earlier battled to a 0-0 regulation and extra-time draw.

Lennon had to go through extra-time and penalties in the semi-finals against Denham Town on Tuesday but coach Sherlon Lennon, said they were well prepared.

"We were well prepared for it, and winning the title and bringing it back to the community is a wonderful feeling," he said.