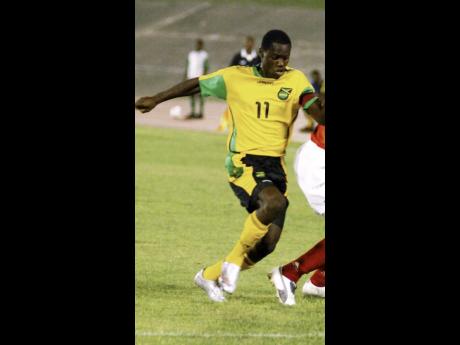 With Darren Mattock sidelined for the next two months with a serious knee injury, national football coach Winfried Schafer is assessing his options up front ahead of next month's Copa America Centenario in the United States.

The German tactician has identified Finland-based striker Dever Orgill, as the main candidate to lead the line in the tournament.

Mattocks suffered a torn meniscus recently and did an operation on the injury. He is not due to return to action until after the Copa Centenario.

However, coach Schaefer believes he has enough options available to replace the former Bridgeport High Manning Cup star and he has his eye on Orgill, who currently leads the Finland first division in scoring with six goals from eight matches for IFK Mariehamn this season.

"Mattocks has a problem but we have enough strikers," Schafer told STAR Sports at the Premier League play-off launch yesterday in New Kingston.

"(Gil) Barnes has played good in MLS ... he played few minutes for Houston against New York but it's not enough. (Clayton) Donaldson played well but I have to find which two players play together best," he continued.

When asked about the possibility of former Montego Bay United Striker and the Red Stripe Premier League's top scorer, Owayne Gordon, replacing Mattocks the German said he was not fully convinced and would need to see him playing at a higher level to be certain.

"Maybe I will go to the states and watch him (Gordon) play a match in a better league, then I can say very good I am happy with that," he reasoned.