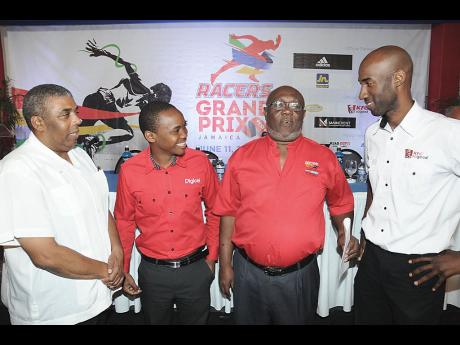 The men's 100 metres takes centre-stage at the first ever Racers Grand Prix athletics meet, set for the National Stadium on June 11.

The meet was launched at the Jamaica Pegasus Hotel yesterday and organisers promised a plethora of world stars.

The men's 100m promises to be a monster clash, boasting a line-up that can rival any major track and field meet across the globe.

Three of the nation's most popular sprinters, back-to-back double Olympic and world champion, Usain Bolt; former world 100m champion, Yohan Blake, along with the man with the most sub-10 100m in history, Asafa Powell, will feature in the blue riband race.

"Judging from what has been happening, they are all rounding into top shape and I assure it is going to be thrilling, exciting, and very fast race," Racers coach Glen Mills said.

Racers Grand Prix has partnered with a number of world renowned sports providers including ESPN and Eurosport to bring the meet to Brazil, France, USA, Middle East, Romania, South Africa and Mexico.