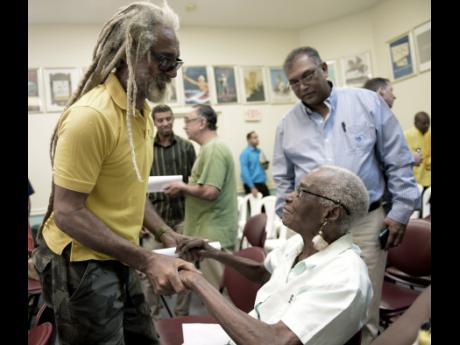 Administrator Freddie Green and Olympians Rupert Hoilett and Dr Cynthia Thompson were lauded for their accomplishments in sport last week Thursday, June 29. Staged by the Olympians Association of Jamaica, the event celebrated the trio's role as trailblazers. Accordingly, all three were delighted to be honoured.

Green, who served ISSA, the University of the West Indies and the sport of volleyball with distinction, said gratefully.

"I didn't expect anything like this and it's great. It goes to show that when you do something you love, somebody will reward you sometime after."

Thompson, an Olympic 100 metre finalist in 1948, and Hoilett shared Green's sentiments. An Olympian as a Kingston College student-athlete in 1964, Hoilett humbly noted that others had run for Jamaica while at high school.

"I was kinda prepared and encouraged by the great Herb McKenley, I took his challenge and it came to pass," he said.