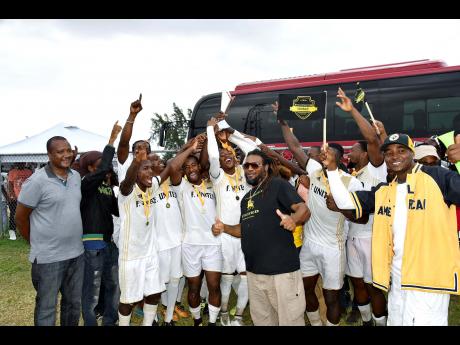 The Champagne came out the and celebrations were wild after Falmouth United won the 2018 Grandeur Transportation Services/MonyMusk Rum Trelawny FA Major League on Sunday.

The Dr Dean Weatherly-coach side beat Duanvale FC 2-1 on Sunday at the Elleston Wakeland Centre in Falmouth.

"The whole season was a fruitful one coming here in the Trelawny area. The boys gave a good account of themselves. They worked hard ... now we look ahead to the Confed, which won't be as easy as the Major League," said Weatherly.

Falmouth ended the season unbeaten, and striker, Scott, emerged the competition's top marksman with nine goals. Despite his team's impeccable record, Weatherly said the team will have to be strengthened to compete at the next level.

"In the off season we have to look at what we have, where we are going and do some heavy recruiting," he said.

Willis Brown, the disappointed coach of Duanvale, complained about the officiating that he believed robbed the competition from a good final.

"For a big final like this I think they could use a better set of officials, but I give it to Falmouth because they won the game," said Brown.

Both teams ended the game with nine players as four footballers were sent off between the 68th and the 73rd minutes. Scott was sent off for a second caution in the 70th minuite.

Duanvale's Rajiv Chung received a red card for serious foul play in the 68th minute. Phelan Chritie and Garfield Henlon were sent off in the 73rd minute after a bust-up.