RSPL Rumble: Flying under the radar - Dunbeholden looking to quietly get into RSPL playoff round this season 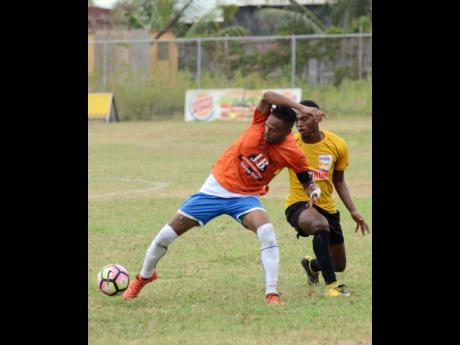 Garett Richard (left) of Dunbeholden FC skillfully shields the ball from the oncoming Hakeem Smith of Barbican FC during their encounter at the Dunbeholden Oval in the Magnum/Charley's JB/JFF promotion series on Sunday, June 24, 2018. Dunbeholden secured promotion to the Red Stripe Premier League from this competition.

Roger Simmonds, manager of newcomers Dunbeholden FC, said they are aiming for a top-six finish in this year's Red Stripe Premier League (RSPL) competition, which kicks off on Sunday.

The St Catherine-based Dunbeholden, along with Mount Pleasant Football Academy from St Ann, are the promoted teams entering this year's RSPL season.

Simmonds said that they had a good preseason and his players are now anxiously awaiting their opening match against last season's beaten finalist Waterhouse FC on Monday night.

"It is our first season and our one year plan is to maintain ourselves in the Premier League," said Simmonds.

"In fact, we are thinking that we can reach the top six this year, but we are quite cognizant of how difficult the league is going to be," he said.

Dunbeholden have been relatively quiet in the transfer window in the off season, signing only six players.

These signings include Omar Palmer of Waterhouse, Damarley Oliver of Harbour View, and Shaquille Lewis of Barbican.

Simmonds added that the new signees have adapted themselves well in the team.

"We have signed six players and so far the team is gelling well," said Simmonds.

"One of our aims for the season is to get players who can connect for the season, rather than just bring in big name players," Simmonds said.

"We have played quite a number of practice matches with various teams and we have matched up quite well. We are stocking up quite well ahead of the start of the season," Simmonds said.

Dunbeholden are scheduled to play their home games at the Spanish Town Prison Oval.