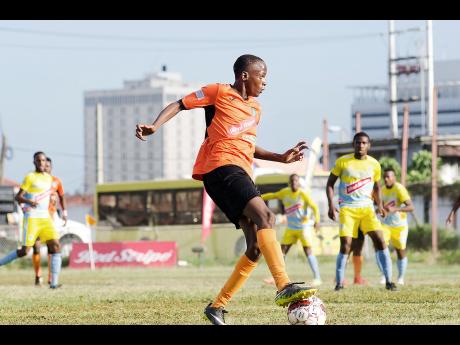 Last season, many Kingston College (KC) fans rued that their wily winger Trayvon Reid was mainly used as a substitute. The former national under-17 star was a favourite with the KC diehard, who constantly questioned coach Ludlow Bernard's decision to not start him in most matches.

However, one year later, Reid, who also made his debut in the Red Stripe Premier League (RSPL) last season for Tivoli Gardens, is now relishing his starting role this season.

But the player, who had a number of off-field issues last season, noted that becoming more mature this season has allowed him more responsibility.

"So far, I feel I am doing very well. Even though my performance is not really up to the standard I want it to be at now, but it will come through the course of the season," he reasoned.

With the departure of last season's ace, Rashawn Mackison, Reid has been thrust into the role of talisman this season, and he calculated that he will have to score more than 25 goals to help the famous Purples to their first Manning Cup title in 32 years, even though he started the competition a bit slower than he anticipated.

"By the third match, my expectation was that I would have scored at least six goals. But the target this year is to win the Manning Cup and to do that, I think I will have to score over 25 goals this season. I still need to make better runs and improve my finishing, but I'm looking for a very good season, and I hope I can help KC win the Manning Cup," he added.