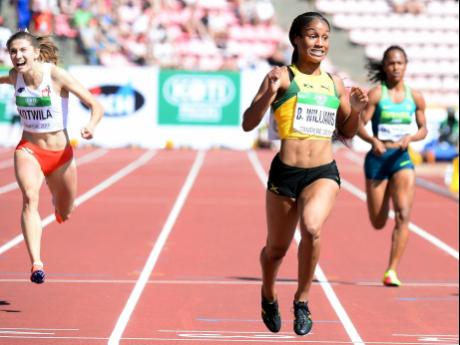 All-Pro Track and Field, an online magazine covering the sport of athletics has named Jamaica's Briana Williams, its Female Prep Athlete of the Year. Describing Williams as a star in the making, the site describes her 2018 campaign as a remarkable season.

"We have a star in the making, and Jamaican fans are excited to see what the future holds for Briana Williams," wrote All-Pro in a post that appeared late in September announcing the award. "The Jamaican sensation had a remarkable season with lots of accolades," it continued, enumerating her Carifta Games Under-17 victories in the 100m, 200m and 4x100m while lavishing praise on the US-based 16-year-old for her double gold-medal performance at the World Under-20 Championships.

"Williams came back to win the World Under-20 gold medal in both the100- and 200-metre dash races in Tampere, Finland, setting a championship record/personal best in the 200-metre dash with a time of 22.50s."

That time replaced the 2004 time of 22.71 seconds by Simone Facey as the national Under-20 record.

When the Ato Boldon-coached sprinter zipped her fastest 100-metre time of the year, 11.13 seconds in Jacksonville, Florida, on March 17, she missed the Jamaican national Under-20 record, held by Veronica Campbell-Brown, by just 0.01.

Set before her 16th birthday, the Jacksonville jaunt made her the fastest 15-year-old of all time.

Williams is in good company as All-Pro Track and Field named Bahamian Shaunae Miller and American Christian Coleman as its female and male athletes of the year. The undefeated Miller dominated the 200m and 400m in 2018 and joined the elite sub-49-second club by running the 400 metres in the personal and national record time of 48.97 seconds. Coleman set an indoor 60-metre world record of 6.37 seconds and won the World Indoor gold in March. After some struggles with injury, he returned to win the 100 metres at the Brussels Diamond League meet with a world-leading time of 9.79 seconds.