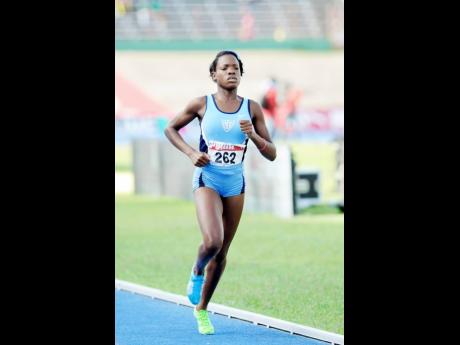 A trio of Jamaican ladies won important titles on the US collegiate indoor track and field circuit on the weekend.

Marleena Eubanks and Shardia Lawrence hit the target at the Big 12 Championships in the 800 metres and the triple jump, respectively, while Jazmine Fray ran to victory in the 800 at the South Eastern Conference Championships.

Eubanks is now number one on the University of Kansas all-time indoor 800 metre performance list.

Competing in Lubbock, Texas, she also showed a useful turn of speed when she helped Kansas to the silver medals in the 4x400 with a relay leg clocked in 52.84 seconds.

Lawrence, a standout at Vere Technical and Hydel High, sprung 13.24 metres to win her event. She was placed 12th last year.

Fray, who has always been based in the US, stepped from the runner-up spot she held last year to win for Texas A&M University in Fayetteville, Arkansas. She completed her race in 2 :05.42.

Two young men from western Jamaica showed their worth at the Big 12 meet. Ackeen Colley, formerly of Ruseas, ran to second place for the University of Oklahoma in the 1000 metres, while Odaine Lewis, a Cornwall College graduate, spanned 7.92 metres to finish second in the long jump.

Karayme Bartley, who competed for Garvey Maceo and Kingston College in Jamaica, sped to second place in the 200 metres at the Big 10 meet in Ann Arbor, Michigan. Now at the University of Iowa, Bartley clocked 20.67 seconds.

Sprinter Raheem Chambers, hurdler Jeanine Williams and all-rounder LaFranz Campbell had second-place finishes at the ACC meet in Blacksburg, Virginia. Now at the University of Miami, Chambers missed the 60 metre title by a smidge as his time of 6.62 seconds was 0.01 short of the winner Kasaun James from Florida State. Williams, who represents Georgia Tech, and Campbell, now at Clemson, had the same outcome in their respective 60 metre hurdles finals.

Jhevaughn Matherson, now at Florida State, was third in the 200 metres in 21.13 seconds.

Holloway, who beat Jamaica’s hurdler supreme Omar McLeod indoors last year, blazed the 60 hurdles in 7.44 seconds and missed his own world leading mark by just 0.01. He took the flat 60 and was the long jump runner-up.