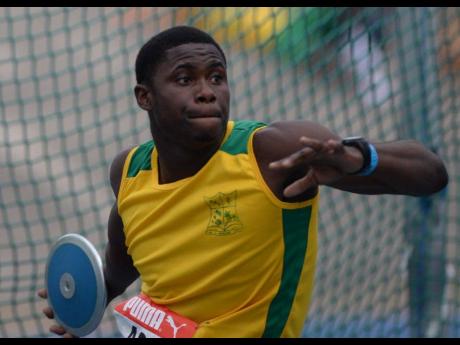 There was Jamaican success aplenty last weekend at the National Junior College (JUCO) and the National Association of Collegiate Athletics (NAIA) indoor championships.

The bright spots reflected growth for the nation's track and field as there were wins for throwers Kevin Nedrick and Devia Brown, hurdler Demisha Rosewell and 400 metre runners Twayne Crooks and Stacey-Ann Williams.

His victory in Pittsburg, Kansas, was matched by ex-Hydel High discus ace Brown, who won the weight throw with a twirl measuring 18.49 metres. She was second in the shot with a mark of 15.55, metres and the Boys and Girls Championships class 1 girls shot record holder Fiona Richards was sixth. Richards, a star at home for Buff Bay and Edwin Allen High, is in her first season overseas.

Williams and Crooks showed their prowess in the 400 metres in Brookings, South Dakota, with commanding victories. Williams, who ran and studied at STETHS last season, ran like clockwork with times of 53.61 seconds in the heats and 53.63 to win the final. Crooks, the former Vere, KC and University of Technology student-athlete circled the track twice in just 46.57 seconds to beat former Lennon High and Calabar High athlete Rajay Hamilton, now at Keiser University in Fort Lauderdale.

Nedrick, Williams and Crooks all represented Jamaica at the IAAF World Under-20 Championships. Crooks won a 4x400 relay bronze in 2014, while the other two were teammates in 2016.