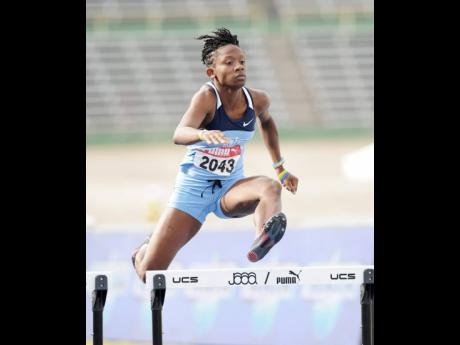 Jordan Scott, the former Campion College student-athlete, sprung to the forefront of the Jamaican triple jump scene with a big win at the NCAA Division 1 Indoor Track and Field Championships recently. Now studying at the University of Virginia, Scott came to with a centimetre of his best jump ever to win his first NCAA title. In the Division 2 NCAA Indoors, Dianna Johnson and Shannon Kalawan also stood atop the podium.

Scott had tripled 16.90 metres last month to become the third best Jamaican triple jumper indoors. He came close to duplicating that in Birmingham, Alabama, host of the event, with a winner measured at 16.89 metres. Competition came from a familiar face as Odaine Lewis, formerly of Cornwall College, popped out 16.65 metres to grab second for Texas Tech.

In another event, 60 metres hurdles finalist Janeek Brown had the pleasure of contributing points to a team title won by the University of Arkansas. The former Wolmer's Girls School star was fifth in 8.04 seconds.

Four other Jamaicans reached their respective finals. They were Clayton Brown in the triple jump, Karayme Bartley in the 200m, Sharrika Barnett in the 400m, and Jazmine Fray in the 800m.

Johnson, the former Holmwood Technical ace, who is a senior at Adams State University, zipped the 60 metres in 7.21 seconds, just 0.01 the meet record at the NCAA Division 2 meet, with fellow Jamaican Rene Medley third for Lincoln University.

Kalawan, who was the 2016 World Under-20 400 metres hurdlers runner-up while at Edwin Allen, defended her 400 metre title in a battle against a compatriot. The St Augustine University athlete edged home, 53.74 to 53.77 seconds, over Rene Ambersley.

Jamaicans Kissi-Ann Brown, Medley and Ambersley teamed to give the Jamaican head coach of Lincoln, Victor Thomas, some joy, with a victory in the 4x400 metres. The winning time was 3 minutes 37.12 seconds.