Sky's the limit for Young 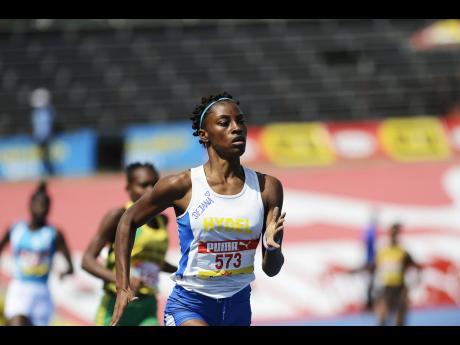 “I hope to go out there to lead as a captain and also as my final year to do my best to hit personal bests and also to give as much points to my team as possible.” That’s the mindset of Charokee Young, co-captain of Hydel High School, as she heads into the ISSA/GraceKennedy Boys and Girls’ Athletics Championships this week.

It’s a matter of note that her personal bests - 52.82 seconds for 400 metres and 2 minutes 07.10 seconds for the 800m – came at Champs last year. Speaking at a recent Hydel training session, coach Corey Bennett indicated that Young is ready to accelerate. The velocity of the reigning Class One 800m champion has improved so much that he’d be tempted to deploy her to the 4x100m if the Champs schedule allowed.

Her new speed levels augur well for her possibilities in the 400m, where she was second last year to graduated teammate Shian Salmon.

Asked about her potential for the future, he repeated, “I honestly think the sky’s the limit. I mean, I liken her a little bit to Natoya Goule”, he praised with his comparison to the 2018 Commonwealth Games bronze medal winner.

That fits with his view of the 800m potentially being Young’s best event in the future. “As long as she goes in the right hands”, he added. According to the coach, Young is going to college overseas.

Young is also a fan of the national senior 800 metre record holder too. “What stands out about her is that she never gives up, she always keeps pushing”, she said admiringly.

Young is on course for a meeting at Champs with fleet-footed Petersfield High School standout Shaquena Foote. Speaking after her Class One 400m/800m double at Central Championships, Young said simply: “Yes, Sir”, when asked if she was looking forward to racing the Petersfield girl.

Young and co-captain Ashanti Moore led Hydel to a strong team performance at Central Championships. Moore won the Class One 100m and 200m, while Young did her double. Those victories revved up their teammates. “They were pretty proud of us, knowing that we went out there as captains, executed properly by leading the team doing our best and having four individual titles and also two relays, gold medals for all of them”, she reported.

She and coach Bennett will be planning for something similar this week.