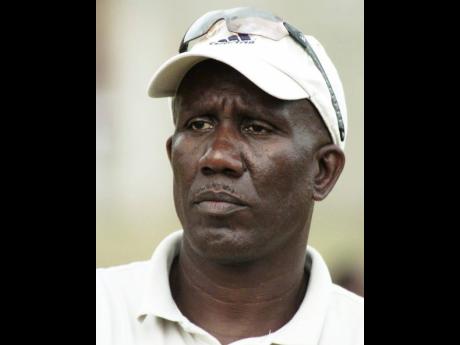 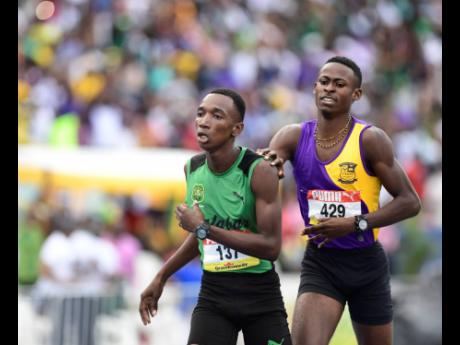 Kimar Farquharson (left) of Calabar High School wins the Class One boys 800m final ahead of Tyrice Taylor of Enid Bennett High at the 2019 ISSA/GraceKennedy Boys and Girls’ Athletics Championships.
1
2

The improvement in the standard by schoolboys in the 800 metres hasn't gone unnoticed. Among those excited about the acceleration is noted coach Jerry Holness, who set current national women's national record holder Natoya Goule on her way at Manchester High School. He recommends an improvement in tactics as part of the way forward.

"I'm really, really excited," said the coach, who brought Goule and current Boys and Girls Championships Class Two record holder Carlene Robinson to the fore. "I'm happy to see the performances this year. This is something that we've been working for over the years and hoping that we can see a breakthrough", he presaged.

Sixteen years ago, the Holmwood Technical High School pair of Jermaine Myers and Kirk Wint and the Holness-coached Christiana High School prospect Shaun Smith were setting the pace. "We were hoping then during that time that Shaun Smith, Myers, Wint, those guys would have carried on,"the veteran coach recounted at the recently concluded Carifta Trials.

Smith went to Oral Roberts University after his time at Christiana ended and lowered his personal best to 1 minute 46.36 seconds and reached three NCAA finals. In 2006, he keyed an Oral Roberts win at the Penn Relays with a leg timed in 1 minute 45.9 seconds. "But we haven't seen much, and this is something we have been hoping to see a real breakthrough, because in truth and in fact, we have the potential," Holness continued.

He is confident that Jamaicans can speed in the 800 metres. "We have the athletes but it just that it takes some of these athletes that are fighting to break into the 400 need to step up with that type of splits to the 800," he said.

Regaling in the fast times of this season by Calabar's Kimar Farquharson and Tyrese Taylor of Enid Bennett High School in particular, he said: "You know, what we have seen this year, I'm hoping that the coaches, the athletes will continue to work on that in order for us to get better results."

Taylor led Farquharson through the first lap at Boys and Girls' Championships in 53.2 seconds, with the Calabar ace slipping past to set a record of 1 minute 48.67 seconds. "There's no doubt that they have the speed that will take them to higher levels in the 800, but I'm really concerned about their headspace as to the tactical approach because I think in both class 3 and the class 1, there were some great tactical errors," he reckoned.

According to Holness, Tavaughn Martin of Bellefield and Taylor lost to Jaquan Coke of Kingston College and Farquharson, respectively, because of poor tactics. Reviewing Martin's class 3 race: "Tactically, he just went out there and ran like a scared hare and it cost him the race," he said.

Regarding Taylor, Holness suggested: "I would say the leg speed I think he possesses he could have taken it from the 600 metre mark and win quite comfortable, but he changed his race tactics and tried to take the race at the 400 metre split, and he paid for it."