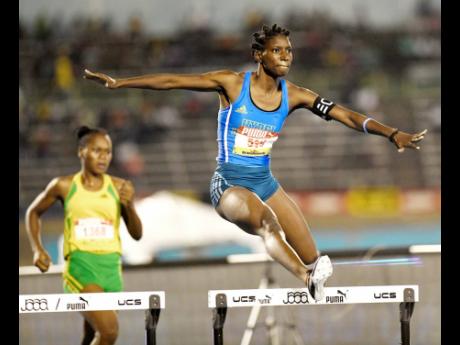 Among those helping the GC Foster College for Physical Education and Sport to the 2019 Jamaica Intercollegiate Track and Field Championship was bright prospect Shiann Salmon. The former Hydel High School standout contributed a win in the 400m hurdles and a solid runner-up finish in the 400m. The results left her optimistic about the future.

Busy at the National Stadium last Friday with heats of the 400m intermingled with qualifying and the final of the hurdles, Salmon came through with flying colours. She won the hurdles in 56.66 seconds and returned to clock 52.42 behind Sada Williams of the University of Technology in the 400.

The 2018 Boys and Girls Championship double gold medallist estimated: "Well, it wasn't easy, but it wasn't as hard as I expected it to be," in an observation about her smooth run in the 400m hurdles, "I just got out, held my pace and came home," Salmon said.

Hydel captain last year, she feathered the accelerator last Friday when she had a tough schedule.

"I think I just gave what it took to make the finals of the 400m because I knew I had to conserve energy for the 400m hurdles final," she explained.

She finished her first Intercollegiate Championships by helping GC Foster to win the 4x400m. Speaking a fortnight after her 20th birthday, she said she gets a push from training with the likes of three-time World Championship finalist Kaliese Spencer and CAC 400m hurdles champion Rhonda Whyte.

"It's really helping me because they're among the best in the world," the ISSA/GraceKennedy Boys and Girls' Athletics Championships 400m hurdles record holder said of the GC Foster/Sprintec training environment run by Maurice Wilson, "and if I'm going to get near to the best, or at the top, then I have to first conquer those who are here."

Asked if she still plans to go to university in the United States, the 2018 World Under-20 400m metre hurdles runner-up said, "That's a pending decision, I'm not sure as yet."