Thompson in the hurdles mix too 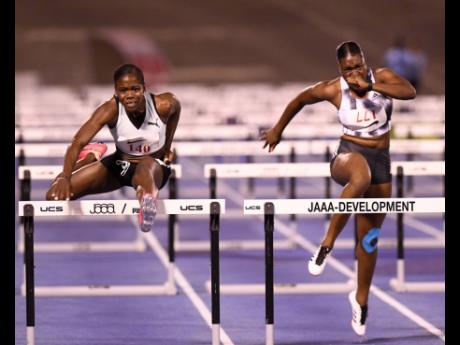 Megan Tapper wins the 100m hurdles ahead of Yanique Thompson at the Nike Seniors Link- Up Track Meet at the National Stadium last Saturday.

With Danielle Williams winning at the Doha Diamond League meet and Janeek Brown speeding on the US college circuit last weekend, it’s easy to forget how deep Jamaica’s battalion of 100 metre hurdlers is. Among them is 2018 Commonwealth Games bronze medallist Yanique Thompson. The former Holmwood Technical star is looking forward to the competition.

Thompson made a step in the right direction to Jamaica’s 2019 World Championship team last Saturday. Running at the National Stadium at the Nike Seniors Link-Up, the Maurice Wilson-coached dynamo bashed a chunk off her season’s best of 13.70 seconds on March 16 with a runner-up time of 13.50.

“I feel very rusty but I’m grateful for the run because I haven’t been racing much this season”, said the 23-year-old hurdler of a race won by 2016 Olympic semi-finalist Megan Tapper. “I wasn’t ready to run as yet so coach didn’t want me to come out here and run because I wasn’t ready,” she explained. “so he waited until I was okay enough to come and compete.”

Tapper, who was timed in 13.26 seconds and Thompson ran into a pesky headwind blowing at 2.6 metres per second.

World Under-18 100 metre hurdles champion in 2013, Thompson finds no comfort in the September 27 start to the 2019 World Championships. “Probably not”, she reasoned, “but being that the fact is that the Trials hasn’t changed, it will probably be a bad thing because the Trials hasn’t changed but the Championships is further down, so it doesn’t really do much for you right now because you have to make the team for you to benefit from it.”

The Trials, or National Senior Championships as it is officially called, arrive in June.

The petite Spanish Town native finished just behind Williams at the Commonwealth Games last year to give Jamaica the bronze medal. In 2017, she won a running battle with knee trouble to win the Jamaica Intercollegiate title for the GC Foster College for Physical Education and Sport. To cap everything, she hurdled all the way to the World Championship semi-final.

There she missed the final by just 0.03 seconds.

Her 2017 times showed the progress as she moved her lifetime best from 13.33 to 13.13 at Intercol and onward to 12.69 seconds at the National Championships. Last year, in addition to getting the Commonwealth bronze, Thompson came close to her personal best with a 2018 mark of 12.74 seconds.

Now she is rolling again, Thompson is ready face the likes of Williams, Brown and Tapper and the challenge of getting ready for June. “Well yes, I always look forward to the competition”, she smiled, “and, hopefully, I’m in my tip-top shape to come out here and perform.

In Doha last Friday, Williams clinically dispatched a world-class field in 12.66 seconds to open her account in the Diamond League. A week earlier on April 26, Brown clocked a personal best 12.57 seconds running for the University of Arkansas in the United States.