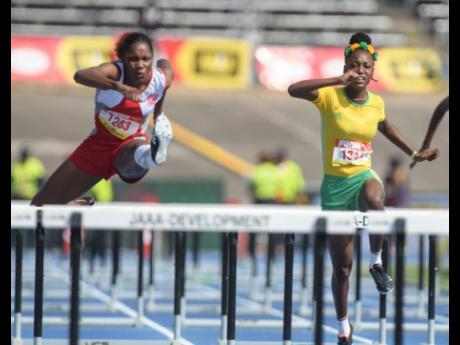 Daszay Freeman (left) of The Queen’s School wins Heat Three of the Class One Girls 100m hurdles ahead of Vere Technical High School’s Roxan Foster at the 2018 ISSA/GraceKennedy Boys and Girls’ Athletics Championships.

Most individual ISSA/GraceKennedy Boys and Girls' Athletics Championships (Champs) winners dream of seeing their names up in lights. Daszay Freeman, the two-time Champs hurdles gold medallist, is not one of these. Though she loves track and field, her mind is on a career in tourism.

Freeman, who transferred from Manchester High to The Queen's School for sixth form, crowned an undefeated season in the Class One 100m hurdles with a golden run at Champs at the end of March but said recently: "I really haven't thought about track in the long run."

Though the sport is important to her, the Mandeville native explained: "Yes, it is, but I don't know if I'm built for it, you know like, professionally, I just don't think it's what I want to do." Extending the thought, the holder of nine CSEC and four CAPE subjects said: "I know there's talent and a lot of opportunities, but I have a goal in other places." Asked to pinpoint her intended direction, the undefeated Queen's hurdler said: "Business and the Tourism sector, that's what I'm interested in."

She plans to take up a US college scholarship when her time at Queen's ends.

Her win at Champs closed a solid high-school career, bedecked with a Class Two 100m hurdles title for Manchester High in 2016, Carifta Under-18 title in 2016, and bronze medal at the 2017 World Under-18 Championships.

"I think it wasn't a bad Champs but I'm grateful for my gold medal," she reflected. She clocked 13.63 seconds to win, but feels she could have gone faster. "I know I'm capable of it, but I don't know, it just never happened", said the owner of a 13.37 second personal best.

She has fond memories of her first Champs gold, a 0.05 squeaker in the Class Two final over then Manchester teammate Sydney Marshall in 2016. "That was a great year", she reminisced. "That was a very good year."

She left her final Champs with two medals after she placed third in the Class One 200m. She is in love with the curved sprint. "Oooooh so much," she said gleefully. "I love 200 because I'm not really a fast person, but I'm more, I would say, a strong person, so it gives me better momentum and I like the stretch right here," she confessed.

Much of Freeman's 2019 success has come from a changed attitude towards nagging knee and hamstring injuries. She described her previous approach to injury as 'nonchalant'. "This year, I decided it's my last year and I want to make a difference, I want to be significant, so started to, you know, address these injuries."