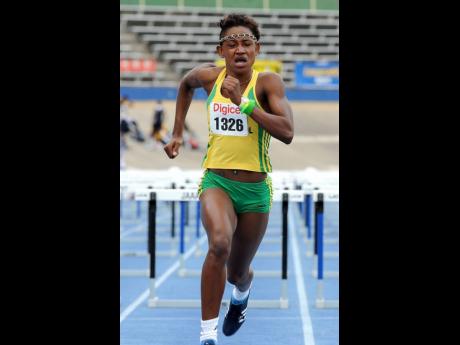 Devia Brown, the 2016 World Under-20 discus finalist, threw all meet long to capture three events at the Junior College Division 1 track and field Championships in the United States. Brown was unstoppable in the discus, shot put and hammer throw as Jamaicans starred on the campus of New Mexico Junior College last weekend.

Brown, who was at Hydel High when she became the first Jamaican girl to reach the World Under-20 discus final, did the shot/discus/hammer throw triple for Central Arizona Junior College with winning distances of 16.67, 53.22 and 59.90 metres, respectively.

The versatile Jamaican had won the discus last year but moved to the top for the first time in her other two successes. For good measure, she was second overall in the javelin.

Central Arizona has often been a favoured collegiate stop for Jamaicans. In the past, Gregory Haughton, Winthrop Graham and Howard ‘Bridman’ Davis attended that institution before moving on. Haughton became a star at George Mason University, where he won the bronze medal at the 1995 World Championships, while Graham and Davis went to the University of Texas and Texas A&M University and later were teammates on the 1988 Olympic silver medal 4x400 metre relay team.

There were seven other Jamaican winners at the meet. Former Vere Technical notable Demisha Roswell gave the hosts something to smile about with a 100 metre hurdles win in 13.20 seconds, a time which may have benefitted a little by the 1128 metres altitude at Hibbs where the New Mexico institution is located. Rosewell’s compatriots Janiel Moore and Kenroy Williams won the women’s and men’s 400 metre hurdles for South Plains and Barton County, respectively, with times of 60.65 and 49.96 seconds.

The other Jamaican wins came from Rayon Butler in the 800 metres for Western Texas, Asani Hylton in the decathlon for South Plains and Kevin Nedrick of Barton County in the discus. Nedrick’s winning distance of 56.97 metres led a Jamaica 1-2 with Barton teammate Phillipe Barnett in the discus, who also finished second in the shot put with a mark of 17.64m.

Satanya Wright, formerly of St Elizabeth Technical High School (STETHS), had better luck with the baton. She lost narrowly, 53.32 to 53.29 seconds to her Western Texas teammate Mariya Hudson in the 400 metres. As compensation, she won gold medals for her part in both the 4x100 and 4x400 metre relays. Those quartets produced times of 44.25 and 3.44.71.

American Kenny Bednarek produced the highlight of the meet with a fine 200/400 double for Indian Hills Community College. After producing a wind blasted time of 19.49 seconds in the 200 metres preliminaries, he won both finals in 19.82 and 44.73 seconds.