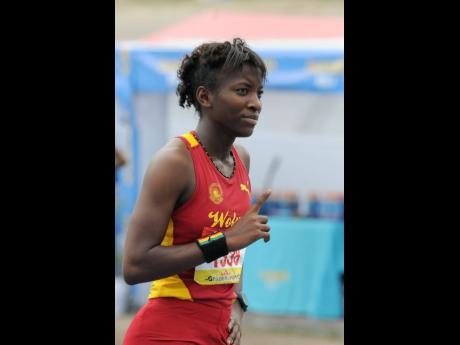 An army of Jamaicans seized spots in next month's NCAA Division 1 Championships via two big qualifying meets on the weekend. Leading the charge were Shadae Lawrence, who recovered from a first-round foul in the discus; Jordan Scott, the 2019 NCAA indoor triple jump champion; and fleetfooted hurdler Janeek Brown.

Competing at the West Regional qualifying meet in Sacramento, California, Brown posted a 200 metres personal best of 22.47 seconds, and in the 100 metre hurdles, the University of Arkansas stepper easily advanced with a wind-aided time of 12.71 seconds.

Speaking beforehand to the US publication TRACK AND FIELD NEWS, Lawrence said: "That's a risky meet. We have to ensure we get in the top 12 in three throws. Anything can happen."

Even though she has recently upped her national record to 65.05 metres, the Colorado State University senior fouled her first attempt. Fortunately, she recovered with a safe throw of 60.28 metres and now she can concentrate on regaining the NCAA title that she won for Kansas State in 2017.

The other Jamaicans to advance from the West Regionals were Jazmine Fray of Texas A&M University in the 800; Lawrence's former Kansas State teammate Ranae McKenzie, the top 400 metres hurdler at 56.24; high jumper Sashane Hanson of TAMU-CC; and Lawrence's twin sister, Shardia; and Jehvania Whyte in the triple jump; Sean Bailey of the University of Texas El Paso with a personal best of 45.19 seconds in the 400; University of Iowa sprinter Karayme Bartley in the 200; Juliane Walker of Kansas State in the long jump and in the men's triple jump,;Odaine Lewis of Texas Tech and O'Brien Waysone of Texas.

Lewis and Waysome will face Scott when they get to the NCAA Championships as the University of Virginia bounder had the second-best mark - 16.48 metres at the East Regional meet in Jacksonville, Florida. Also successful there were Waseem Williams of Purdue and Raheem Chambers of Miami in the 100, Andre Ewers, the Florida State senior in the 200; the University of Florida pair of World Under-20 bronze medallists Chantz Sawyers in the 400 and triple jumper Clayton Brown; World Under-20 110 metres hurdles champion Damion Thomas of LSU; and Roje Stona, the Clemson University discus thrower.

Ewers ran the fastest 200 metres time by a Jamaican this year at 20.14 seconds.