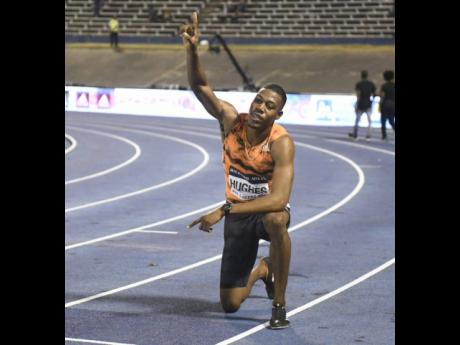 A year ago, Zharnel Hughes produced a personal best of 9.91 seconds to beat Noah Lyles of the United States and Racers clubmate Yohan Blake in the 100 metres at the Racers Grand Prix. With this year's Grand Prix set for June 8, Hughes plans to go speeding again. More broadly, the British sprinter has his mind on Doha and the 17th World Championships.

"Practice is going really good, really good, " he said at last Saturday's Jamaica Athletics Administrative Association (JAAA) All Comers Meet inside the National Stadium. "My next race is Racers Grand Prix, so hopefully, I can lay down something good at that meet."

His personal best and a 100-metre victory at the 2018 European Championships give the Anguilla native cause for optimism. "It's a long season, taking things in steady progress right now, so for me, it's just getting stronger and trying to execute each race as it comes along, and hopefully, everything goes according to plan when World Champs comes around,"he explained.

Those plans include a bid for the sprint double. "It's in my plans (to run the double), so hopefully, when the time gets nearer, hopefully nothing changes and I can stick towards it," the 2015 World Championships 200-metre finalist said.

"Last year was the first I ever took it seriously after Champs," he recalled of his 2014 ISSA/GraceKennedy Boys and Girls' Athletics Championships record run of 10.12 seconds for Kingston College, "so I mean, to come away and run 9.91 last season and still learning the event, I definitely think I have great potential of bettering myself."

An early-season run of 10.01 seconds made Hughes one of the favourites for the Commonwealth, Games gold medal, but he instead ran the 200 metres. "The decision was already made that I would run the 200, so that's how comes I did the 200 at Commonwealth, but the 100 was quite open, to be quite honest," he recalled.

"I didn't know it would have been like that," he said.

Running for England, he crossed the line first in the 200 but was disqualified for a lane violation.

Hughes, who has run 10.20 in the 100 this year, is high on Great Britain's chances in the 4x100. He's especially pleased that a long string of British baton disasters ended with a fast win at the 2017 World Championships.