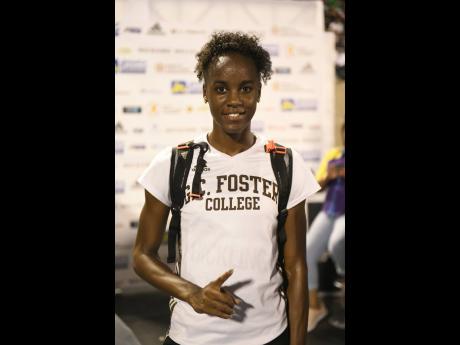 There could be medals in the future for long jumper Tissanna Hickling. That's the considered view of her coach Marlon Gayle, who has tutored the GC Foster College student-athlete to a new personal best of 6.82 metres. Hickling popped the big jump last Saturday at the National Stadium at a JAAA All Comers meet and prompted Gayle's bright prediction.

The first-round effort put her 10 centimetres beyond the World Championships qualifying standard and made her the third longest Jamaican long jump of all-time. "This is her second year as a senior and last year was a good year for her," he said of the girl coached by Kurt Brooks to Boys and Girls' Championships long and triple jump gold medals at St Jago High School in 2017.

"She medalled in competitions that she represented the country in," Gayle reminded. "And I think, once everything works out according to plan, she should be in the medals just the same."

Wearing black-green-and-gold, Hickling placed third at the NACAC Championships and the Athletics World Cup last year and extended her personal best from 6.39 to 6.61 metres.

Gayle expects more from Hickling. "We saw a few things today that weren't perfect, but nonetheless she was in the right frame of mind, she was executing most of the things better, most of the phases better," he said.

Gayle hopes that technical improvements will be on display at the National Senior Championships which are scheduled for June 20-23. "Pretty much, between now and Trials, we'll be working on being more consistent than that and through Trials and beyond, definitely show a different level of maturity," he promised.

Hickling's big jump was aided by a friendly breeze that was just under the legal allowable limit of 2 metres per second and Gayle hopes the horizontal jumps at Trials will be scheduled to take advantage of such conditions. Speaking on May 18, he said: "I am just hoping we have the event at the time when the wind will facilitate those who are in tip-top shape to really get the distances."