Brown with NR among Jamaican winners at NCAA 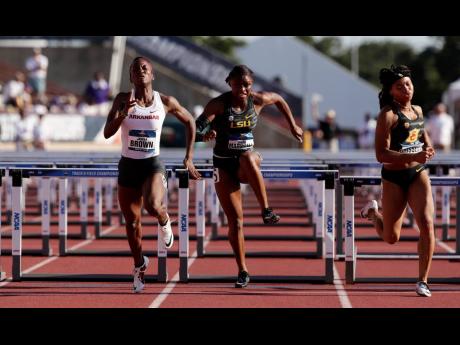 Brown, the former Wolmerian, arrived as the hurdles favourite after a string of fast times and didn't disappoint. After a personal best of 12.53 seconds in the heats, the University of Arkansas second-year student athlete zipped through the final in 12.40 seconds to better the 16-year-old Jamaican mark of 12.45 by 2009 World champion Brigitte Foster-Hylton.

In addition, Brown's record is the fastest time in the world this year. In the 200m, she cut her personal best to 22.40 seconds in fourth place.

The third Jamaican win came from Lawrence, who cranked up a personal best 13.99 metres to win the triple jump for Kansas State University. In a poignant celebration, she was embraced by her twin sister Shadae, who had just won bronze in the discus for Colorado State University.

Brown's hurdles time was just one of a series of lightning quick performance witnessed by fans at the Mike A Myers track facility on the campus of the University of Texas. Nigerian Divine Oduduru gave Texas Tech 20 points with a swift sprint double. First, he equalled the world lead in the 100 with a 9.86-second winner. He returned later to win the 200 metres in 19.73 seconds.

Jamaica's Kiara Grant, now at Norfolk State University, set a short-lived Jamaican junior record of 11.04 seconds in the 100 metres as the winner, Sha'Carri Richardson of Louisiana State blazed a world junior record of 10.75. The 40-year-old men's 110 metres hurdles record of 13.00 fell to Grant Holloway of the University of Florida. Holloway, who beat Jamaica's hurdler supreme indoors last year, was timed in 12.98 seconds.

Earlier, Holloway ran the third leg on a Florida 4x100 team that became the first college team to break 38 seconds with a time of 37.97. In the last men's race of the meet, he hared through a 43.75-second anchor leg in the 4x400 metres relay.

The other Jamaicans to leave the meet with individual medals were Shanice Love, who launched a lifetime best of 62.69 metres for silver in the discus; Sharika Barnett, third in the 400m and Jordon Scott in the triple jump.