I can still make the team – Spencer-Carter 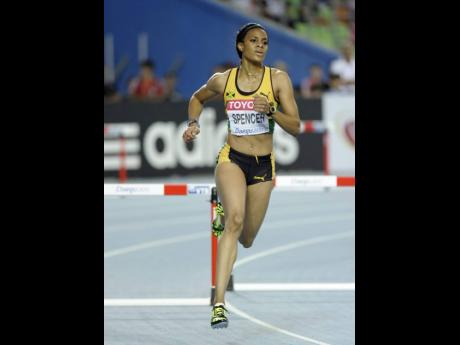 The women's 400 metres hurdles will be one of the big races of next week's National Championships, with five ladies already under the World Championships qualifying standard of 56.00 seconds. The quintet of contenders includes 2017 World bronze medallist Ristananna Tracey, Commonwealth champion Janieve Russell, and CAC Games winner Rhonda Whyte. Nevertheless, former world number one Kaliese Spencer-Carter is hoping to be in the mix.

"I'm in very good shape,"said the 32-year-old hurdler earlier this month. "So I'm just expecting, hopefully, that the time will come together and I'll get the perfect race at the perfect time."

Spencer-Carter has run 57.17 and 57.20 seconds in her two 400- metre hurdle races this season but said: "The time will come when it matters, and I'm just going out there - just want to get my technical aspects together - and if I'm there, I think the time will come," she said.

At her best, the Westmoreland native has run 52.79 seconds and has twice been ranked world number 1 by the respected US publication Track And Field News. fourth in the 2009 and 2011 World Championships and the 2012 Olympics, she did win the gold medal at the 2014 Commonwealth Games.

Now a member of Maurice Wilson's Sprintec Track Club, Spencer-Carter is training with Whyte and Salmon at the GC Foster College for Physical Education and Sport, and she said having them as training partners is a plus. "Definitely," she affirmed. "We have Rhonda Whyte, we have youngster here Shian, and it has been going well so far, and we have some guys there who have been working pretty well."

"Training has been going pretty well, so I'm just expected to do great," Spencer-Carter said.

Wilson coached the younger Tracey when she zoomed into the 2016 Olympic final and when she stormed to third at the 2017 World Championships.

In her last hurdles race, Spencer-Carter battled swirling winds and Salmon in a Jamaica Athletics Administrative Association (JAAA) All-Comers meet at the National Stadium in a run where she targeted technical improvement.