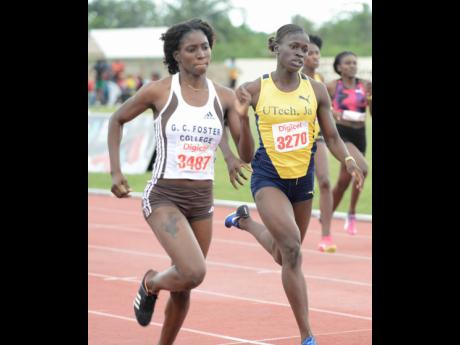 A day after she had run her way on to Jamaica’s 400 metre hurdles team to the 17th World Championships in Doha, young starlet Shian Salmon was still lost for words. When the reality sinks in, she intends to get back to training, with reaching the World final as her goal.

A star for Hydel High School last year, Salmon cut her personal best from 55.78 seconds to 55.54 in the heats at last week’s National Senior Championships before touching down to 55.39 for second place to Rushell Clayton in the final.

“I’m guessing the reality hasn’t really sunk in as yet, but I’m just taking it as it goes along,” said the young woman, who turned 20 on March 31.

“I knew that there were a lot of competitors out there with more experience than I had,” she reasoned. “So I just wanted to make the final and then I went in the finals, I was going to look at my race strategy that I was doing from the season, fix it and then revamp, and then come to the final and try to do my best to get in the top three.”

Given that her previous 2019 best was 56.66 seconds, she had peaked well for the Nationals.

“I was surprised, but it didn’t really shock me as how it had shocked other persons, because I knew I had it in me. I just needed to put the right race strategy together.”

Her training partner, Rhonda Whyte of the Sprintec Track Club, was third.

“That was really good for both of us to make the team. We will be there together, so I’m guessing we can motivate each other to get the best of our performance there.”

For Salmon and Whyte, Doha lies ahead.

“We have to return to training and work even harder than we were working before, because this is the world stage and you know, the competition is tough,” Salmon explained. “So the aim is just to make the finals and take it from there.”