Riley happy to put injury woes behind him 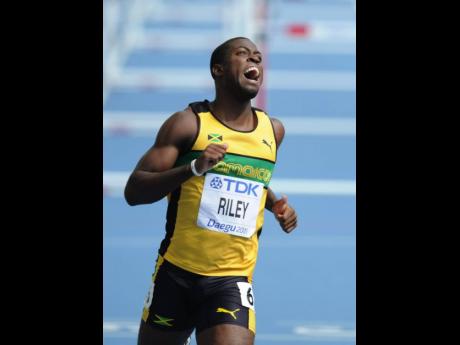 If you see a broad smile on the face of 110-metre hurdler Andrew Riley, it's the sign of relief. Riley emerged from the shadow of injury in May to grab third place at last month's National Championship. With that trouble behind him, the 2014 Commonwealth champion will next settle into the blocks on July 9.

Riley swooped into third from lane one at the Nationals to join reigning world champion Omar McLeod, 2018 Commonwealth champion Ronald Levy, and 19 year-old youngster Orlando Bennett on Jamaica's team to the 17th World Championships. "I injured myself at the World Relays, so there were doubts coming into the Trials," he recounted before leaving home in Florida for a series of races in Europe.

A hamstring strain at the World Relays in May had cost him crucial training time. "I started hurdling like a week before the Trials, so I was going into the trials not knowing what to expect, so when I finished third, I was very ecstatic,"said the satisfied Rio Olympic Games semi-finalist.

Before the injury, Riley had been tinkering with his start. Like most world- class hurdlers, he takes seven steps to the first barrier. "I haven't run eight steps for the last eight years, so it was kind of new to me; so all that time we were trying to experiment until I got hurt and we were taking it slowly coming back," he said.

With time running out, a switch was made back to the seven-step start. "Everything worked out perfectly," Riley remembers of his Trials run, which netted a season's best time of 13.33 seconds.

The Calabar High School and University of Illinois graduate will return to competition on Tuesday, July 9, in Budapest, Hungary, at the Istvan Gyulai Memorial, where the entries include McLeod and Riley's training partner, American Grant Holloway. Victor over McLeod in a 2018 indoor 60-metre hurdles race, Holloway won his third NCAA title last month for the University of Florida with a collegiate record of 12.98 seconds. The Memorial will be the young American's professional debut.

"I'll be over there for a while, then I come back and try to prepare for the Pan-Ams", outlined the man with a lifetime best of 13.14 seconds. Track and field at the Pan-American Games begins on July 28.

Delighted by his own good fortune at the Nationals, the 31-year-old Riley was also happy for Bennett, the 2018 World Under-20 runner-up, and praised him and Calabar coach Craig Sewell. "The coach there is doing a fantastic job, and the young kid was very excited, very excited."