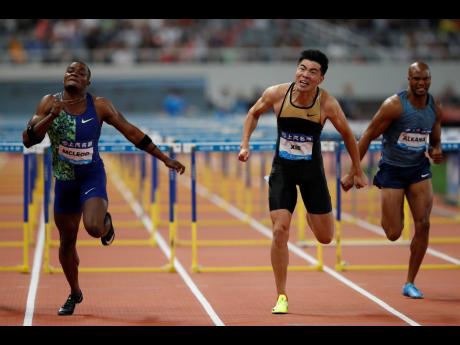 (From left) Jamaica’s Omar McLeod, Xie Wenjun (China) and Antonio Alkana of South Africa compete in the men’s 110m hurdles during the Diamond League Track and Field meet in Shanghai, China, on Saturday, May 18. McLeod won in 13.12 seconds.

Hurdler supreme Omar McLeod leads a 10-strong Jamaican contingent at today's Istvan Gyulai Memorial, in the Hungarian locale of Szekesfehervar, outside Budapest. McLeod, the world and Olympic champion in the 110m hurdles, faces a tough line-up but will hope to set the pace for the other Jamaicans present. They include current Commonwealth champions Fedrick Dacres, Danniel Thomas-Dodd, Ronald Levy, Janieve Russell, and world champion medal winners Shericka Jackson and Stephenie Ann McPherson.

McLeod fell near the finish at the Rabat Diamond League race and led most of the way at the Prefontaine Classic two Sundays ago. He goes to Szekesfehervar to race against Grant Holloway who won the NCAA title by shaving the 40-year-old record set by legendary Renaldo 'Skeets' Nehemiah down from 13.00 to 13.12 seconds. The field also includes the last two Commonwealth Games champions, the Jamaicans Andrew Riley and Ronald Levy, and Britain's 2018 World Indoor Championship winner Andrew Pozzi.

McLeod has run 13.12 seconds this season.

Dacres has an even tougher job with Daniel Stahl, whose recent personal best of 71.86m makes the big Swede number four all-time, and Lithuania's 2017 World Champion Andrius Gudzius also set to step into the throwing circle. In the women's shot put, Thomas will encounter the Hungarian who knocked her off the podium in the final round of the last World Championships, Anita Marton.

Jackson, an impressive National Champion at 49.78 seconds, and McPherson must match spikes in the 400m with World Champion Phyllis Francis of the USA and former World Under-18 champion Said El Naser of Bahrain.

Russell and Tracey, third at the World Championships, both missed team spots at the recent National Championship. In Szekesfehervar, they race for redemption in a 400m hurdles contest including Ashley Spencer, the 2016 Olympic bronze medallist.

The other Jamaicans involved are 2014 Commonwealth champion Rasheed Dwyer in a stacked 200m field, 400m man Javon Francis and 2014 and 2016 World Under-20 400m hurdles champion Jaheel Hyde. The latter has added incentive. Hyde needs to meet or surpass 49.30 seconds to punch his ticket to the IAAF World Championships in Doha, Qatar.

His compatriot Blessing Okagbare is on a fine run of form. The long legged Nigerian has compiled wins in Rabat over 100m and at Prefontaine in the 200m, with Jamaica's Elaine Thompson among the vanquished. In Szekesfehervar, Okagbare will have to deal with 2018 Commonwealth winner Shaunae Miller-Uibo of the Bahamas and the women she hijacked in the Rabat 100m, the outstanding Ivorian Marie Jose Talou.