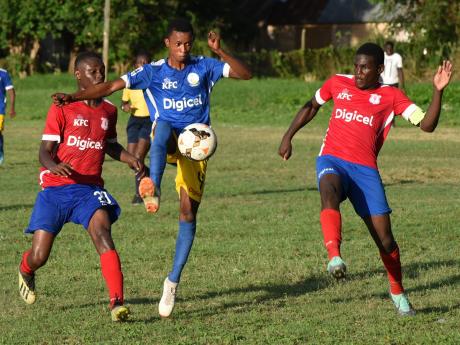 Delroy Trowers (centre) from Hydel High controls the ball in the midst of the Camperdown pair of Cafu Washington (left) and Jeovanni Laing in a ISSA/Digicel Manning Cup first-round match at Caymanas Bay, St Catherine on Friday, September 13, 2019.

Fresh from their 1-0 win over fellow group favourites, Hydel on Friday, Camperdown high school coach Christopher Bender said there will no place for complacency in his team when they face Meadowbrook in their third match in Group D of the ISSA/Digicel Manning Cup competition at Alpha Boys home today at 3.30 p.m.

Bender said Kingston High's surprise 1-0 win over Charlie Smith on Saturday has etched firmly in the back of their minds and that there will be no place for any player that shows any signs of complacency prior to or doing the course of the game.

"I have said to the team that any player that shows any sign of complacency they will not play or they will be taken off the field," he stated. "In the back of their (players) minds when you face one of your biggest challenges in a team like Hydel the mindset when they go in a game like this (Meandowbrook) is that they are facing a weak opponent. But what happened to Charlie Smith against Kingston Senior (high) we are quite wary of that and we want to go out and put in a professional performance and get the result."

Camperdown are the only team in the group with 100 percent win record and Bender is convinced they are progressing steadily and he hopes that they peak at the right time. "We are steadily improving and we have not played our best football as yet. We led one nil against Tivoli but that was rained out. We started well against Mona but did not finish the half well. But it has been a combination of things why we haven't played our best but the team is improving as the season progress and we saw signs of that against Hydel. They were efficient and organised, so it was marked improvement against Hydel and we looked bright throughout. But it is early in the season and we are looking to peak at the right time," he said.

"We want to play every game on its merit and the result will come as a consequence of our performances, so I am not concern over scores now but how we improve from defense to offense and I have seen that improvement, so the team is progressing."

Camperdown has scored identical 1-0 wins over Mona High and Hydel to lead the points standings with six points, they are followed by Meadowbroook, Edith Dalton James, Hydel and Mona on three points a piece, while Tivoli and St Mary's College are at the bottom of the table with zero points each.