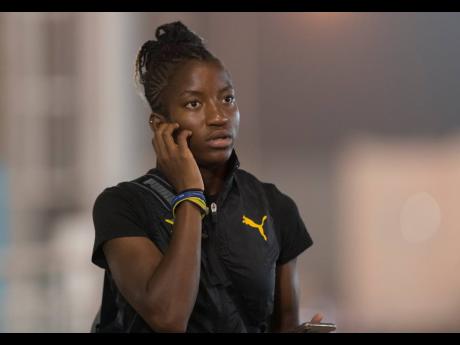 Former national 100m hurdles record holder Janeek Brown on her way to training at the Qatar Sports Club in Doha, Qatar, yesterday, ahead of her participation at the IAAF World Championships on October 5.

After coming into the season with only three legal sub-13 second performances, the 21-year-old ran under the threshold 10 consecutive times, including her immaculate 12.40 seconds effort to break the NCAA Division 1 and then national record.

Her production this year has catapulted her among the best in the world.

But she had to watch her compatriot Danielle Williams, who struck a rich vein of form in the latter part of the season and erased Brown's national record in less than two months after it was established, with 12.32 seconds.

Though she struggled to maintain her form in the past three months, Brown is eager to see what more the season has in store for her.

" I just feel blessed to be here (at Worlds)," Brown said. "I didn't expect to be here so quickly at 21 years old, and so I am trying to enjoy the moment and perform to the best of my abilities," Brown said.

"I feel like we have done enough, but there is more to do because we are 12 days out (at the time of interview), so the process is not over."

Along with Williams, Brown will also have to contend with the likes of world record holder Kendra Harrison, Olympic champion Brianna Rollins-McNeal, and Nia Ali.

The preliminary round of the 100m hurdles is set to begin on October 5.