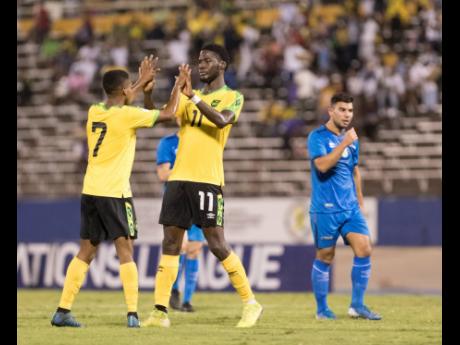 Jamaican striker Shamar Nicholson (right) celebrates after scoring against Aruba in the Concacaf Nations League match at the National Stadium in Kingston, Jamaica, on Sunday October 13, 2019.

Led by an inspirational performance and two goals from Malique Foster, The Reggae Boyz turned in a much better display than in their first meeting with Aruba last Saturday to beat the southern Caribbean team 6-0 at the Ergilio Hato stadium in Curacao yesterday.

Foster scored in the 17th and 53rd minutes and set up schoolboy Lamar Walker to score in the 18th minute. Chavanney Willis (7th), Shamar Nicholson (24th) and Junior Flemmings (47th) were the other scorers for the Reggae Boyz, who now lead Group C in the Concacaf Nations B League with 12 points from four matches, scoring 18 goals with none conceded.

Jamaica dominated the early possession and seven minutes into the contest Willis fired the Reggae Boyz into the lead. The Boyz then came close in the 10th minute when an Aruban defender headed a cross from a short corner against the crossbar.

The host who were looking to hit on the break, broke through the visitor's defensive line a few times throughout the half but never really threatened the group leaders.

Malique Foster added to Jamaica's lead in the 17th minute when he volleyed home from the edge of the box. Foster then set up Walker who made it 3-0 two minutes later.

Foster and Junior Flemmings came close to increasing the lead in the 34th minute, before Nicholson slotted home from close range to put the Boyz 4-0 up at the break.

Two minutes into the second-half Flemmings broke through and tuck the ball under Aruban goalkeeper to put Jamaica 5-0 up. Then, in the 53rd minute, Foster added his second and Jamaica's sixth after good play by Flemmings on the left.

Flemmings and Willis came close afterwards, while Nicholson had a strike ruled out for offside. But Jamaica bossed possession and managed the game well afterwards, giving the host very little touch of the ball and very little sniff at goal and eventually came away comfortable winners.