Webster ready to lift Wolmer’s out of 25-year misery - ... believes he can lead maroon and gold to Manning Cup title 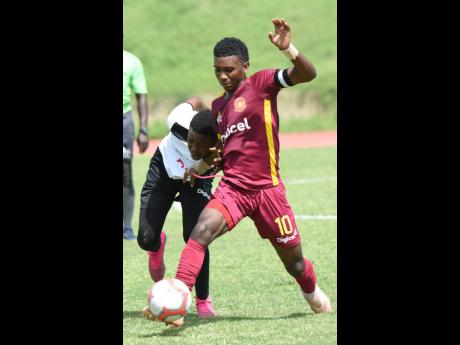 Ronaldo Webster, who starred for St Elizabeth Technical in last season's daCosta Cup competition, did not believe he had the supporting cast to go all the way and help them reclaim the title they last won in 2015.

However, he has switched schools and is now leading the lines for Wolmer's Boys School, who he is hoping to help to their first Manning Cup title since 1994.

Webster, who netted four goals in a 10-0 win over Greater Portmore in Group E ISSA Digicel Manning Cup action on Monday, says his decision to leave St Elizabeth for Wolmer's was a result of his Premier league ambitions.

The Cavalier player said moving to Kingston would make training and other things more accessible.

"I was at St Elizabeth Technical. I didn't have a reason to change but because I am playing Premier League, it would be easier for me to stay in Kingston ," he said.

As a player who has experienced playing in both Manning and daCosta Cup competitions, Webster strongly believes the rural area competition is tougher. "daCosta Cup is rougher by far because you have a lot of competitive teams to play against. My performance in daCosta Cup last season was brilliant, I just needed more support from my team to bring them to the final but unfortunately that didn't happen. I scored 21 goals and we reached the quarter-final,"he continued.

But the centre forward who has already scored 13 goals for Wolmer's this season, even though he missed four matches, is confident they have a team capable of bringing the title to Heroes Circle for the first time in 25 years.

"I am coming off injury and I missed about four games or I would be on about 20-25 goals. But I just need time in coming back and get more goals. It's still early days and I am just working with the team and trying to get the gel, so I am looking to the second round when it is more competitive before I can say I am finding my feet," he reasoned.

However, with his experience and ability, he thinks that once his teammates get to understand how he plays, it will put them in a better position to win their first title in over two decades.

"That is the aim (win Manning Cup). I have been there and done that, I am just looking to go forward to the second round and bring my team to the final and get that trophy. The aim is to win and that is why I am trying to get the gel with the team because I am the most experienced player, so I have to put in extra and get everybody to understand my style and it has been working so far, so I believe that we can go all the way this year," he said.