C’down and Charlie in must-win clash 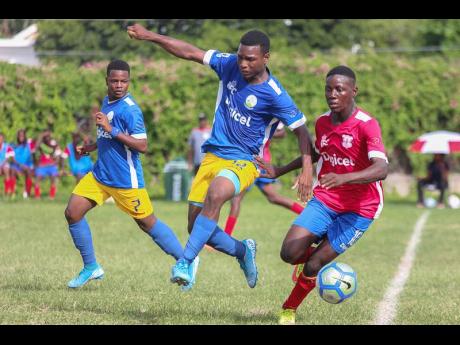 Camperdown High School, one of this season's hot favourites for the ISSA/ Digicel Manning Cup, will have everything to play for when they take on Charlie Smith High School in the first game of the Group G quarterfinal double-header at Stadium East this afternoon at 2 p.m.

In the feature match, Kingston College will play Wolmer's Boys School at 4 p.m.

Camperdown lost their opening quarterfinal game 3-2 to Wolmer's last Wednesday, and coach Christopher Bender knows nothing but a win will be enough to keep his team in the competition.

"Fate has put it in our hands again. We need to beat Charlie Smith and Kingston College, but we will take Charlie Smith in our first game. We knew from the game finished last week that the only way to qualify (for semi-finals) is to win our next two games," he said.

Bender believes that Charlie Smith's inspirational display against Cornwall College in the Champions Cup on the weekend will serve as a big motivation for the Jerome Waite-coached team. However, he is confident they can come away with the result they need.

"First of all, Charlie Smith is very difficult to play against, and based on their performance against Cornwall College, they will be coming very determined. But our objective is to win this game at all costs and give ourselves a chance. There is no two ways about it. There is only one way for us, and that is to win the game," he continued.

"We have injuries coming out of the game last week, but this means it's an opportunity for other players to step up to the plate. But we also have to be better in both areas. We have been creating a number of chances, but our goal ratio has gone down. We know we are playing better-quality teams, but once we are composed in front of goal, we should get some goals. It will be difficult, but I am very confident we can get the job done."

Meanwhile, Charlie Smith coach, Jerome Waite says that Camperdown looks like one of the stronger teams this season, but his team is looking to register their first win of the quarterfinal and keep their hopes alive.

"One of the objectives is to stay competitive in the Manning Cup, and to stay competitive you need a win to have a chance going into the final game. We also want to ensure the players get as much playing time and exposure because they are the ones for the future," he said.

"Camperdown is a good team. It's a team that has an outside chance (to win competition). They have a lot of qualities in all areas. They lost their last game, but I don't think you can write them off. It will be a tough game as the team is sore because we played three games in six days and fatigue has taken its toll, so we are trying to see if we can get the body recovered and the muscles replenished."

Kingston College and Wolmer's share the lead atop the standings with three points each, but Kingston College hold the better goal difference after their 5-0 win over Charlie Smith.