All square between JC, Excelsior 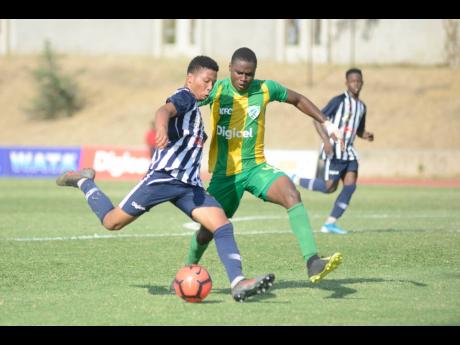 Jamaica College (JC) hit a blip in their hopes of qualifying for the ISSA/Digicel Manning Cup semi-finals when they played to a 0-0 draw with Excelsior High School at the Stadium East field yesterday.

The Old Hope Road school dominated most of the match but had nothing to show at the end of the 90 minutes and coach Davion Ferguson thought they only had themselves to blame.

"It's a draw, and the result was not what we really wanted," he told STAR Sports. "But if you create all the chances and don't score, you are not going to win games.

"But this problem that has been plaguing us all season, but we will have to pick ourselves up and come again Saturday."

JC were the better team in the first half but could not take advantage of the few half chances that came their way.

JC's best chance of the half came from a cross that hit the post and rebounded off goalkeeper, Pepitta Smith, who scrambled to prevent the ball going over the line.

After the break, JC had three great chances through Alvarez Cooper, and Phillon Lawrence.

Excelsior had one good chance to clinch the points when they stole possession from the last defender but Jaheim Flemmings and Smith failed to make them pay.

JC also had two good opportunities to steal all three points but Lawrence and Thomas wasted those chances, while Cooper squandered a glorious opportunity from six yards in the closing seconds to win the game.

Halliman said Excelsior came with a game plan and it worked almost to perfection.

"We are almost out of the competition but we are not giving up, so we came and played with pride," he said. "But we have seen them a couple of times and we planned for them."

The later match in the double-header saw St Andrew Technical (STATHS) qualify for the semi-finals after beating St George's College 3-1.

STATHS have six points, JC two points and St Georges and Excelsior one each.