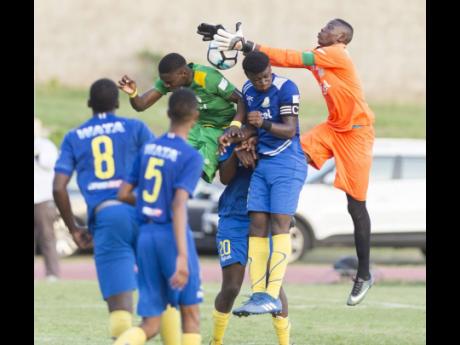 Hydel came from behind to beat Vauxhall 2-1 and Davis, one of the top performing goalkeepers last season, said this team is not as strong as last season, especially in defence, but he believes that with faith they can repeat as champions.

"The team has not performed the way I want them to," he said. "People don't have it that the defending champions are looking to defend their title. But we are saying that it's only the Walker Cup alone we have left, so let us work towards it. We just want to defend our title and every day we train with that mindset.

"Our team may not be the strongest, but we are hoping for the best, and with faith as small as a mustard seed, great things can happen."

Although the high-spirited goalkeeper believes his performance will be crucial to any success Hydel have this season, he says his team showed enough against Vauxhall to give him confidence going forward.

"Ever since I have been a member of the team, I have always been there for them. Everyone in my school expect great things from me, so I always have to go out and perform well and I always do good for my team. So it all depends on how I perform and right now I am feeling very great and strong for my team.

"But they also showed that if I make mistakes, even though that rarely happens, they have my back. But I don't feel there are anymore mistakes to be made. I know my duty now," he insisted.

The multitalented sportsman, who once played cricket at prep school and who used to represent Hydel in swimming and athletics, is a key member of the basketball team and he looks forward to helping them make a better run this season than they did last term.

However, his greatest hope is that he has done enough in both arenas (football and basketball) to earn himself a scholarship at the end of the school year.

"I am a main player on the basketball team, before I did swimming, track and field and played cricket in prep school. Basketball is what I am going to do after Manning Cup but I can't be there for them right now because I am playing my favourite sport football. We (basketball) didn't have a great season last year but we hope to go further this season because we have a better team.

"But the aim is to go overseas to college and I would gladly accept a scholarship in any of the two, although I would prefer a football scholarship. But my performances have been very good and it will get better because I train very hard and staying positive," said the Arnett Gardens goalkeeper.