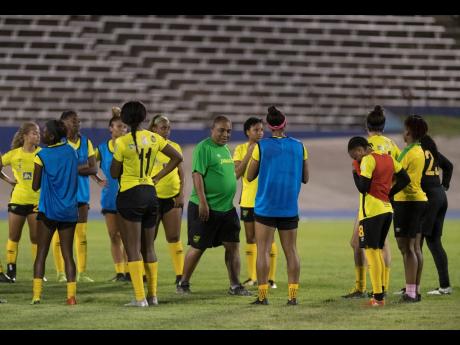 Reggae Girlz head coach Hue Menzies interacts with the team during a training session held at the National Stadium on Monday, May 13, 2019.

Reggae Girlz head coach Hue Menzies says he is still unsure where he stands with the Jamaica Football Federation (JFF) regarding his role with the team going forward.

Menzies missed the Girlz's first- round Olympic qualifiers at the National Stadium in September and October because of unpaid renumerations owed to him by the JFF and said that he would not return to the Reggae Girlz dugout until he was fully paid.

The JFF then decided that assistant coach Lorne Donaldson would take charge of the team in Menzies' absence for that round of qualification. Jamaica qualified for the final round but there has since been no resolution to the conflict between the JFF and Menzies. However, JFF president Michael Ricketts said subsequently that the federation is prepared to look at other coaching options for the team, should they be unable to come to an agreement on a future working relationship with Menzies.

Menzies said the JFF had made no contact with him on his future with the team, but he believes they must act soon if they want to give the team time to prepare for the upcoming qualifiers. But although he has received some compensation, Menzies says a sum is still outstanding.

"No, it hasn't [been settled]," he said. "They haven't reimbursed some of it. They didn't pay all of it and I can't sit and do nothing. My club is a big club and it keeps me busy and pays the bills. They (JFF) have been waiting on all the FIFA monies to come in, but I can't comment on something I don't know, and I don't know what is going on," he said.

However, Menzies says replacing him as coach is not as easy as it looks.

"This is not a football job," he said. "This is way more than football and you can't just say you are going to go out and find somebody to do this. It has to be someone with resources to put them in schools and boarding schools; get them contracts; get them agents to get them to Europe. So it's not a regular job, it's more than a football job and it is very difficult to find someone who has the resources and contacts like I have.

"But they are realising they can't just get anybody, because it is way more than that. The Under-17s, 20s and the senior teams all have qualifiers coming up, so they need to make some decisions. The Olympic qualifiers will be in January [and] February, so they have to make some decision soon. But they owe a lot of people and are trying to pay (them) off, as that is how it is when they get money. But they have a brand that's good, a product that is good. They just need to figure out ways to make money."

Menzies' club, the Florida Kraze Krush, has placed over 400 players in tertiary schools in the United States.