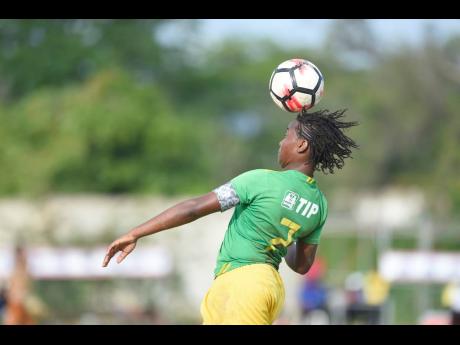 Simone Clarke, the sister of deceased Reggae Girl, Tarania Clarke, is peeved with the Reggae Girlz Foundation for their attempt to raise money for the funeral of her sister without the family's approval.

Clarke said that the foundation, which posted on its instagram account that it was trying to raise US$10,000 for the former footballer's funeral, made no attempts to contact the family as they have been struggling to get the autopsy of Tarania's to be able to arrange the funeral.

"No they (reggaregirlzfoundation) didn't talk to us. I saw it on a phone and I am ignorant (angry) this morning. What kind of bad manners is this?" she questioned. " They are doing something and don't even contact the family. I don't like that idea because they are doing something behind our backs and don't confirm it with us or let us know what is what."

She continued: "I was even wondering if it was somebody trying to do something. We wanted to find out who was doing this without our permission because we are going to sue them because we don't know anything about it.

"So we were going to get a lawyer but Mr (Xavier) Gilbert was saying he was going to make contact with the JFF (first), because he knows them."

Clarke said that the Jamaica Football Federation (JFF) and Sports Minister, Olivia 'Babsy' Grange have been unresponsive in the family's attempts to follow on commitment they made to assist the family with the funeral.

"We are trying get to 'Babsy' Grange and I cannot get to her. She said she was willing to help Tarania. She called us after her death and told us to call her and must not be afraid. But up until this morning, I was trying to get her to ask her to help us get the autopsy. I am not getting through to JFF or anybody, so we are not seeing it (the help). We are not getting anything," she commented.

"So far out of JFF, Babsy Grange, the prime minister is only Mr Gilbert I can call his phone and it never rings more than two time and I get him. Only Mr (Xavier) Gilbert alone."

President of the JFF, Michael Ricketts, said that the federation has been in contact with the family and is still committed to assist with the funeral and it supports the foundation's move to assist.

"The only issue is that we thought they (foundation) would have discussed it with us first and foremost. We will support it. As it relates to the insurance, yes, she was insured and we starting the process but that will take some time," he added.

Ricketts was also asked what is the JFF looking to do in aid of the burial apart from the Reggae Girlz Foundation and the insurance? He outlined that they have an obligation to do so.

"We have committed ourselves to that. They had a wake the other night and we contributed. So, of course, we will give some support, we have an obligation to do so."

The deceased Clarke was part of the national athletes' insurance plan, and, therefore, her family should receive a payout.