Is this STATHS’ time? - The Spanish Town Road- based school start Manning Cup semis as favourite 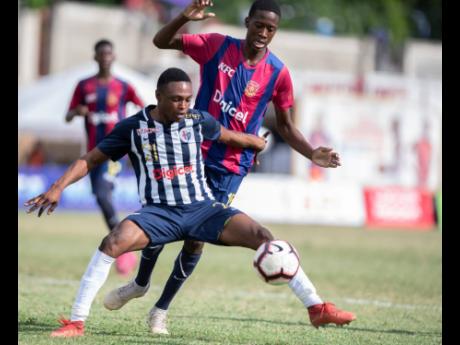 Today, St Andrew Technical High School (STATHS) will enter their third ISSA Manning Cup semi-final in three years but many believe this is their best chance of ending their 32 year wait to lift the coveted Corporate Area trophy.

The Philip Williams-coached team will face Wolmer’s Boys School in the first semi-final at 3.00.pm, while many time champion Jamaica College battle defending champion Kingston College in the second semi-final at 5.00.pm.

The Spanish Town Road-based school has been in imperious form since the start of the second round, playing scintillating football along the way, leading many to pick them as the favourites for the title. But, Williams says any of the four teams can win the title and his team is not accepting the ‘favourite’ tag, as their intention is to continue what they have been doing to get the results they have been getting.

“We haven’t accepted that we are favourites. There are four teams remaining and any can win. This is the semi-final and we have been playing good football and we plan to continue doing that.

“The team is shaping up and gelling and the more we play the better the team gets. We have given ourselves a good chance to be in the final and we just need to put everything together and execute over the 90 minutes,” he said.

The introduction of Warner Brown at the start of the second round has been the biggest positive for Williams’ team. The centre-forward has scored six goals in five matches and has been the revelation of the latter stages. But Williams believes it will not only be key for Brown and his attacking partners, Shemar Daley and Romario Campbell to be on song, but for all facets of their game to come together at this crucial stage of the season.

He says Wolmer’s pose a major threat and they will have to make use of their chances. “We have to get our game together and take our chances when we get opportunities. Wolmer’s is traditionally a good team and they have proven so this season. This will be no walkover. It will be a difficult challenge. But we are up for the challenge and we know what to do to get to the final,” he said.

Wolmer’s coach Alex Thomas, believes the teams are evenly matched and thinks the game will be decided from the dugout. “Our team is aiming for the final and we know the task ahead and what we are going there to do. We are taking it a step at a time. We have St Andrew Technical and we are ready. We have a well rounded team, we understand the job and ready for the challenge. It will be end to end battle but it will come down to the coaches. It’s going to be a coach’s game,” he said.