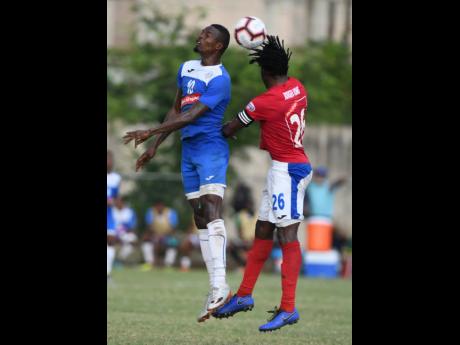 Portmore United’s Cory Burke (left) goes up for a header with Dunbeholden’s Shaquille Dyer during their Red Stripe Premier League encounter at the Spanish Town Prison Oval on Sunday, December 1, 2019.

Jamaican forward Cory Burke says he expects to hit the ground running when he returns to the Philadelphia Union in Major League Soccer. Burke was forced to leave the United States' top- flight league for eight months because of a visa issue.

Burke, who scored 11 goals in 20 Red Stripe Premier League (RSPL) games, will have to contest with forwards Kacper Przybylko, the Union's top scorer of last season with 15, along with Congolese striker Michee Ngalina, Sergio Santos of Brazil, and Americans Fabrice Picault and Andrew Wooten. But Burke is confident he can regain his place in quick order.

Burke, who led Portmore in scoring this term, expects the team to miss his presence but believes they have enough quality in stock to recover from his departure.

"Because they have played with me all season, it is going to take time to adjust to a system without me," he said. "But there will be a few players that will be added to the squad, some who played this game and others who are not involved. But I am looking forward to see the team bounce back next game and I expect them to start getting back some results."

Burke ran into visa problems with the US authorities back in May after he applied for his green card. As a result, he lost his PI status, which allows him to play in the US and he had to return to Jamaica for the period until he could successfully reapply for the visa, which was returned to him recently.