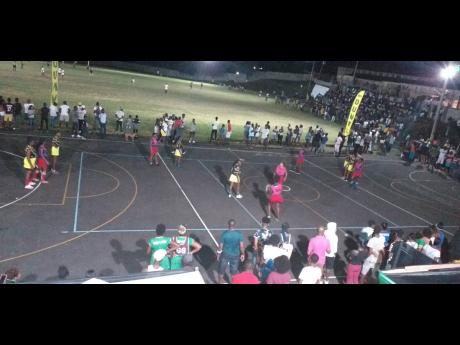 A netball game on during a special rally held under lights at the newly renamed Annotto Bay Multipurpose Complex in St Mary on Sunday.

Sports minister Olivia Grange officially renamed the Westmoreland Oval in St Mary to the Annotto Bay Multi-Purpose Complex, during a special rally, held under lights at the upgraded sports facility on Sunday.

Grange, who spoke at length about the picturesque beauty of the facility, also heaped praise on hometown boys, Raymond Anderson, a vice-president at the Jamaica Football Federation and Member of Parliament Dr Norman Dunn, for what she described as their vision geared towards improving the infrastructure in St Mary.

"This new look facility will allow for the community, especially the youths, to now participate in the various sporting disciplines," Grange said. "Where we are standing tonight was a facility that sat in ruins for many years- ruin and degradation, and was used as a cow pasture for many years. But today, because of the persistence and determination of your member of parliament, we now can boast one the best facilities in St Mary, and in fact in Jamaica, and the envy of many communities.

"This facility is a collaborated product. The CHASE (Culture, Health, Arts, Sports, and Education) Fund contributed. The TEF (Tourism Enhancement Fund) and TPDCo (Tourism Product Development Company) contributed. And at the centre of it was the Sports Development Foundation, which falls under my jurisdiction. We started the ball rolling and that is why tonight I am proud to be here. Tonight, a commitment has manifested itself in the Westmoreland Oval, being renamed the Annotto Bay Multipurpose Complex."

And for his part, Dunn said that the commitment given to the people of Annotto Bay has been kept, and that the varied communities can now come out in large numbers to watch football, netball, basketball, and cricket, especially under lights at nights.

"This is one way of reviving the community spirit and getting the youths to be actively involved in sports," Dunn said. "This a rather large turnout for a Sunday night rally and it can only get better. With this improved facility which now boasts an auditorium, a conference space, bathroom, a balcony, a netball court, and playfield for football and cricket. We could very well be on our way to producing another Konya Plummer (Reggae Girl)."

Around 2,500 residents turned out on Sunday to witness the one- day rally involving football and netball, played under lights.

Awards were also presented to Anderson for his 38 years of continued service to the development of football in St Mary and also at the national level, and to Konya Plummer for her contribution to Jamaican women's football, and her role as captain of the senior national women's team. Plummer's father, Conrad Plummer, received the award on her behalf as she is in Texas with the team preparing for Olympic qualifiers.