High jumper Wilson back and on the way up 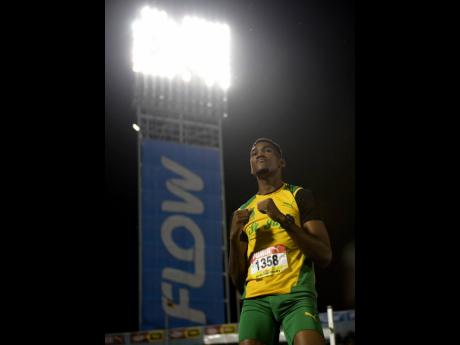 Former St Jago High School jumper Lushane Wilson is back in Jamaica and on the way up. After a pleasing return to high jumping at the Western Relays, Wilson has his eye on Tokyo and the Olympics.

Wilson, the 2017 Penn Relays winner, cleared 2.15 metres on what is now his home track at the GC Foster College for Physical Education and Sport, and one good attempt at the personal best height of 2.20. "It's my first meet and I'm happy with the 2.15 but I could have gone further," he said.

Now enrolled as a student at the College, the multi-talented Wilson spent time in the United States on a basketball scholarship at Chipola College but the 2015 World Under-18 Championship finalist is happy to be home. "I just wanted to get the basketball out of my system," he sheepishly confessed, "and come back and do something for the Olympic year."

Training partner Kimberly Williamson, the Pan-American Games bronze medallist, gave him good marks. "He actually looked pretty good. He had some really good attempts especially at 2.20. His last attempt, had he done that on his first attempt, he would have made 2.20 easily but as he said, it's his first meet so work in progress," said Williamson who advised him during the competition.

He'll be back in action at the Gibson-McCook Relays where the meet record was set 16 years ago by the late Germaine Mason at 2.24 metres. Wilson is aiming to perform better in the National Stadium where he won gold medals for St Jago at Boys and Girls' Championships in classes one, two and three. "You'll see there's a different Lushane Wilson. Hopefully, the fans come out and see the difference," he said.

Asked to pinpoint the difference, the former volleyballer itemised, "there's going to be more aggression, more power and more speed going up to this bar."

Mason came into the 2004 season as the 2003 Pan-American Games champion and after reaching the World Championship final. After Gibson, he made history by winning Jamaica's first high jump medal by placing third at the World Indoor Championship. Sadly, he injured himself in the process and missed the Olympics. When he took the silver in 2008, he was competing for Great Britain.

Asked if he could be the Jamaican high jumper to scale the heights that Mason did, Wilson affirmed, "Definitely, no question."

To have a chance to be the first Jamaican to compete in the Olympic men's high jump since Desmond Morris in 1984, the 21-year-old will have to meet the astronomical Olympic qualifying standard of 2.33 metres. That's one centimetre off than Mason's Jamaican record.